Our penultimate game was a chance to try out the Triumph and Tragedy rules and for Lenin to get some of his Pulp figures back to the table.

An female American archeologist has discovered an ancient temple in the jungle; a temple which is reputed to contain a valuable treasure.  This expedition has angered the local Chinese warlord who considers the temple to be part of his domain and obviously wants to claim the treasure for himself.  His men have occupied the temple and taken the archeologist hostage.  This, in turn, has upset the Americans who have sent a gunboat to rescue her. 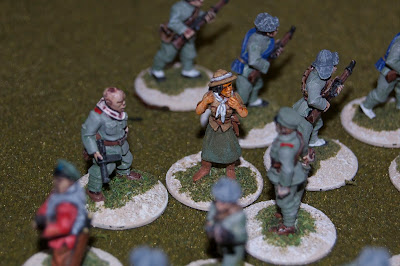 I took the part of the Warlord and his, mostly raw, troops; whilst Lenin played the American sailors from the gunboat. 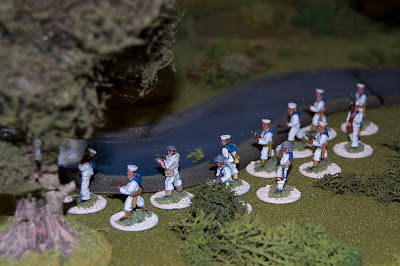 I placed my only trained men along with another raw unit in the temple guarding it and the archeologist.  Meanwhile my remaining unit and maxim gun team remained in my stronghold.  Hearing that the gunboat had landed some troops I ordered the units at my stronghold to march to reinforce the men at the temple. 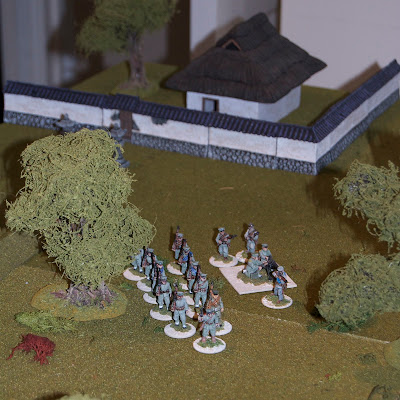 We spotted the Americans advancing through the jungle and deployed to engage them.  Things were going well until they deployed their BAR (which whilst a rather poor LMG was enough to automatically pin raw troops).  This meant that my maxim was deployed but didn't get to fire.  My riflemen opened fire, causing some casualties but soon also came under fire from the BAR.

Meanwhile the other American unit was advancing on the temple.  A firefight rapidly ensued with both sides taking casualties but I had a slight edge as my men were defending the temple. 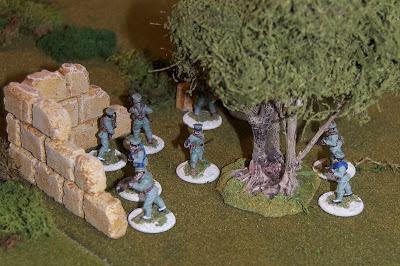 With my reserves falling back the first American unit swung round and advanced towards the front of the temple.  Another firefight began.  With units being gradually whittled down on both sides Lenin decided to assault my position.  His men rushed forward but after a bloody melee were thrown back.  Whereupon my hero leapt up and engaged them with his SMG.  This was the last straw for the Americans and they withdrew.

Whilst the game was fun I'm not sure about the rules.  I have a feeling it's something to do with my expectations relating to the "scale" of a game.  Where you have a very small skirmish I can easily accept these operating in a more hollywood or pulp style.  It can even work when units are added but are merely extras to provide a backdrop for the heroes; however Triumph and Tragedy feels like a unit based game with the heroes acting as units.  My first impression is that this feels a little uncomfortable.  I expected the game to be more "realistic" as it was unit based.  I suspect it will need another go to see if they gel for me.
Posted by Whisperin Al at 1:09 pm