Musketeer have shown some previews of their next 1938 figures, this time it's brigands and they look very interesting:

As you may have notice from my Twitter feed, last weekend was a get together for the old guard of the Jersey Wargames Society. We haven't got together as a group for quite a while and so we decided to put on a few games.

First up Lenin provided the Battle of Um Bbongo Gorge as an outing for his extensive Darkest Africa figure collection. Playing to type I took the part of Commandant Hercule Poirot (a famous Belgian) the representative of His Majesty Leopold II, King of the Belgians. As the only representative of law and order in the chaos that is Africa, my mission was to stop an invasion by that upstart self-appointed so-called king Ndofa, tackle any slavers and collect taxes and export duties.

Things did not start well when I was ambushed by some uppity locals and one section took rather a beating. Having regrouped I spotted some suspicious arabs who could only be up to no good and advanced to investigate. A closer look and the application of my "little grey cells" told me they were slavers and quite hostile. After giving them a pretty good thrashing I turned back toward the local village which was under attack from that rotter Ndofa. After clearing up the misunderstanding with the locals we joined forces to stop Ndofa from stealing the the village cattle and drove him off, albeit the village was a little scorched afterwards. With little persuasion the villagers paid their tax dues in cattle and I was free to discuss the export of ivory and other goods with some big game hunters (must have been after some very big game as they had a small artillery piece!). I made a rapid assessment and secured the appropriate duty and then escorted them to our steamer.

The afternoon game was the Battle of Flodden Field in 1513. With most of the players knowing relatively little about the actual battle it unfolded in a relatively historic way with the English discovering the marsh in front of the Scots position the hard way. With some nicely conflicting victory conditions the Scots forces (some of which I was commanding) played a pretty defensive game but eventually the English got their forces through the marsh and our lack of effective ranged weapons led to the natural conclusion. 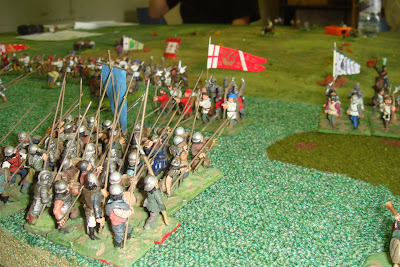 On the Sunday we were treated to a series of small games all of which had been cleverly designed to fit onto a chess board. The first I played was a tavern fight between the Three Musketeers and Rochefort with some Cardinal's Guards. 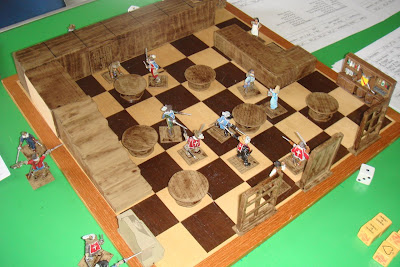 The rules provided for all the usual chandalier swinging, bar sliding and table crushing action and use poker dice for combat resolution. As Rochefort I managed to capture two of the Musketeers and D'Artagnan but one slipped through my fingers... 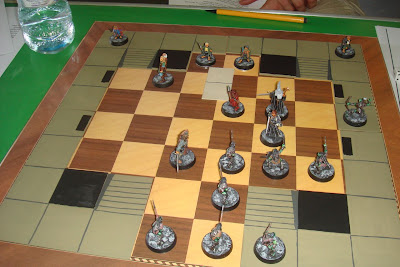 The next compact game was the Fight in Balin's Tomb between the Fellowship of the Ring and a horde of goblins with a Cave Troll! This game is still in the development stage but provided some fun action, especially with the Troll.

Next on the agenda was my game, Chaos in Caracabra de la Cruz, a 28mm skirmish in the Spanish Civil War. With five factions, three Nationalists and two Republican, with some interesting victory conditions the game promised some interesting encounters. 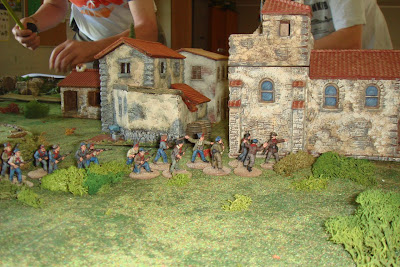 Clearly some of the players actually read their victory conditions because the Carlist contingent followed their's precisely and captured and held a significant part of the village. The Anarchist and Communist militias almost opened fire on each other but the timely intervention of the local priest, in defence of his church, avoided that blue on blue encounter. The Falange reached the church but couldn't get in a withdrew, just in time to block and advance by the Communists who had already had a little encounter with the Guardia Civil.

The Anarchists decided that dynamite was the obvious solution to a locked church door; however the effect led to an appropriate quote from the Italian Job! A similar attempt by the Communists to use dynamite went a little awry when it turned out the dynamitero was quite a familar with it as he'd made out and dropped it amongst his own side.

Meanwhile the Anarchists, playing to type, blew up the church and withdrew (almost in that order!). In the end though it was the Carlists who held on to their conquests, despite a serious challenge from the retreating Anarchists.
Posted by Whisperin Al at 2:35 pm 9 comments:

This Land Divided: Skirmishes and Battles in Wilkes County February and March 1779 is a new supplement for Sharp Practice from the TooFATLardies. Written by Chris Stoesen, a resident of the area, this 74 page pdf booklet provides background and scenarios for a variety of actions in Georgia during the American War of Independence.

Starting with a single page introduction from Richard Clarke the booklet provides 7 pages of background information including the actions covered in the later scenario section. This is followed by 4 pages with an outline of notable units and personalities and a single page bibliography. Another 5 pages address the information necessary to play the scenarios using Sharp Practice, covering troops types, cards, national characteristics, odd weapons, big man creation and the like.

We then reach the meat of the supplement with twelve scenarios of various sizes. Each has a historical background and map followed by briefings for the Loyalists, Rebels and the umpire. The final page of the booklet provides a summary of the figure requirements which really highlights the varying size of the scenarios. The smallest (Scenario 4 - Middleton's Ferry) only requires 21 Loyalist and 13 Rebel figures whilst the largest requires 115 Loyalists and 103 Rebels.

Given the location and period these are militia actions some with indian allies but are no less interesting for that. Indeed they provide a welcome break from some of the more "traditional" AWI supplements which seem to focus mostly on the regular actions.

The booklet is clear and well laid out. As it's not a core Lardies production it doesn't have their humourous asides and the like relying on an apparently well researched historical style. It is not a full supplement for playing AWI using Sharp Practice however but neither is it advertised as such. It resistricts itself to the provision of the necessary information to cover the troops and weapons used in the scenarios.

Unfortunately I have not yet had the time (or indeed collected the toys [yet anyway!]) to play the scenarios but I found the booklet interesting and the scenarios certainly look promising.
Posted by Whisperin Al at 10:47 am 2 comments:

Email ThisBlogThis!Share to TwitterShare to FacebookShare to Pinterest
Labels: AWI, too fat lardies

On the way back from the barbers yesterday I popped into the local branch of the British Bookshops chain. I spotted Fusiliers by Mark Urban but not having read his previous work and with AWI not currently on my radar I wasn't sure. Of course the £2.99 price tag overcame all!

I've been looking at the Perry Miniatures ranges and wondering whether to do another project with their lovely figures, especially given their excellent service. This book combined with This Land Divided the latest TooFatLardies Sharp Practice supplement are certainly pushing me towards AWI (albeit from two different theatres of the war).

I'll post my thoughts on both once I have had a chance to read them.
Posted by Whisperin Al at 8:51 am 5 comments:

Despite not having any of the following on my projects list for this year I have found myself distracted from the planned projects by a few interesting sidelines - some of which I have actually begun "investing" in:

28mm Sudan
I have been admiring the Perry Miniatures Sudan figures for some time and following a recent (much smaller scale game) my interest was rekindled. I rather rashly put in an order and with amazing speed the figures arrived. I have also picked up a couple of suitable buildings and a steamer so I have plenty of scenario ideas!

28mm Dahomey
This is another period of interest which has been restarted. I initially read about the French conquest of Dahomey in Douglas Porch's book on the French Foreign Legion and I have been contemplating picking up some of the Dixon Miniatures figures for it.

28mm Sahara
Yet another colonial period but the French Foreign Legion once again. I do already have some of the Redoubt Enterprises March or Die range and I have been thinking of building this up to allow for larger forces to be deployed on each side.

As a result of all this renewed interest in colonial I suspect a couple of my other projects will take a back seat for a while. I may also get distracted again once my Front Rank Napoleonics come back from the painter!
Posted by Whisperin Al at 5:46 pm 4 comments: