I would like to wish you, your families and friends all the very best for the New Year!  Let's hope it's full of gaming fun!
Posted by Whisperin Al at 11:59 pm 6 comments:

With the old year on its way out and the New Year hoving into view I thought I would have a quick look back on my progress in 2013 and forward to my gaming plans for 2014.

At the start of the year I was rather cautious about declaring my projects for 2013 and only announced a single one -  Muskets & Tomahawks in 28mm.  As a result I can claim to have completed my planned projects for the year (for the first time ever)!  Of course I do have a few other things that I mentioned I might do (most of which were hang overs from previous years) and towards which I mad rather poorer progress:

28mm Mahdist War - The second phase - Khartoum - was a possible for 2013 but didn't make it past the budget review!

28mm Indian Mutiny - finishing off the figures in the painting queue and picking up some additional Gentlemen Volunteer and additional Bengal cavalry was to be part of my 2013 plans.  I did indeed pick up the additional figures but none of them have seen a brush as yet (although I do plan to get them moving in 2014).  I still haven't got around to trying out John Company yet though...

28mm Early War Polish - I am currently basing the (understrength) platoon of these but the SdKfz 221 and TKS are still in the (possibly in appropriately named) WIP box - so I am remain somewhat behind my original plan (2012) and also behind my revised plan (to get them on the table early in the first quarter of 2013).

15mm Marlburian - Not only have all of the figures for the second phase been purchased, most are painted and a goodly number are being based up at the moment.  I am a little late on this one (largely due to real life intruding - or I might have made the planned date).  I am now contemplating phase 3 (which will see Bavarians being added to the French and some more Allies) but that will depend on the budget review for next year.

28mm Montrose - Not only did I get all of the figures based I also managed to get them to the table.  I am still not entirely decided on Pike & Shotte for the rules and I suspect I may need to add some more figures.

25mm French Revolution - The only thing continuing to hold back the basing of these is making a decision on the ground terrain (i.e. what colour).  Not terribly impressive as this was my excuse two years ago!  I will be finishing them in 2014 (probably...)

28mm WW2 Paras - I have picked up the further squad for the Bolt Action US Paras to make up the platoon and plan to get these off for painting in the new year.  I have also picked up a couple more Bren guns for my British Paras to bring them up to the proper Chain of Command platoon strength.

28mm WW1 Belgians - I was hoping that these would be used before the end of 2013; however they remain in the WIP box - I would really like to get them to the table in 2014 if possible though.

15mm Early WW2 - I still have quite a few more of these to base up - so that's another thing for the new year- but did manage to add a decent amount to my collection of 4Ground buildings.

28mm Dark Ages - I didn't even get started on the refresh for this one!

28mm Crusades - Deus Vult entirely failed to spark a resurgence of interest for this project and so I didn't actually do much other than set up a single game with my existing figures - only to find that I don't really have enough (which may explain why I haven't done anything more)!

As to plans for 2014 I have settled on two new projects - one large and one smaller:

15mm Wars of the Roses - I have been meaning to start a larger medieval project and, having visited Towton this year I think that was what swayed me to WotR.  I have already started to supplement my library and have decided to go with the Peter Pig range.  Now I just need to decide between the Canadian Wargamers Group Flower of Chivalry rules and A Coat of Steel rules from the Perfect Captain.

28mm Ronin - I really liked the look of the rules and also the various Buntai being produced by North Star.  And now that 4Ground have added some buildings I am struggling to resist.

I still have some other ideas, largely revolving around expanding some of my existing collection - 28mm WW2 (mainly for Chain of Command) and 15mm ACW (Fire & Fury) but all of the above will depend on how the finances look for next year (and having just received yet another bill through the post I have some concerns there!)
Posted by Whisperin Al at 1:23 pm 10 comments:

Where has he been?

Unfortunately a combination of work and DIY has given me precious little time for gaming during November and December, hence the lack of posts.  Whilst work isn't likely to be any easier during January I have completed my big DIY project and the next one shouldn't be for another couple of months.

But having had some time off over Christmas I have started to get back up to speed and am currently basing up the figures for Phase 2 of my 15mm War of Spanish Succession project - so I should be able to get some of those onto the blog in the next couple of weeks.  I am planning some gaming for around New Year so there is is more content on the horizon!
Posted by Whisperin Al at 12:25 pm 2 comments: 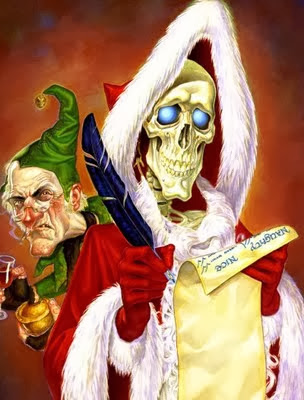 My compliments of the season to you all!  Thank you for stopping by, apologies for my absence of late and here's hoping you get some gaming goodness under the Christmas tree!
Posted by Whisperin Al at 9:37 pm 6 comments: