I've just noticed that The Wargame Shed passed 250,000 page views yesterday and my previous post was number 700.  I know my posting has been a little erratic over the last few months - largely due to "real life" - so many thanks for your continued interest.  I am currently basing up some more additions to my Indian Mutiny collection and have a couple of other posts lined up.

In addition the basing I am currently putting together an Indian Mutiny game for the Maidstone Wargames Society open day at the end of June and then it will be back to sorting out my next 15mm project - Wars of the Roses.  In the meanwhile I have decided to bulk up some of my existing WW2 collection (largely for Chain of Command) and have also started to pick up some figures for Ronin.  I am also thinking of putting together some new units for my American Civil War collection and use that as an impetus to refurbishing it (it was my first major project started over 20 years ago).  So plenty to do and lots of potential diversions on the way I'm sure!
Posted by Whisperin Al at 12:30 pm 9 comments:

I have a little remiss in my updates of late - so a little later than planned...

Lenin popped over again recently and we played a couple of tabletop games including a slightly impromptu game of Chain of Command.  We played Scenario Six: Attack on an Objective from the rulebook and set it around Operation Market Garden.


The Paras advanced rapidly across the whole width of the table and, whilst my troops were in hard cover, they were also lower quality and unable to concentrate their fire.

Whilst my Tiger came as an unpleasant surprise the Paras kept the initiative long enough to inflict a large quantity of casualties before I could get the Tiger into position.  When I did it shook of a couple of hits from the Sherman and a PIAT and then took out the Sherman.  But it was really too little too late as more casualties broke my force's morale and we withdrew.

Another enjoyable game of Chain of Command which presented to really interesting challenges.
Posted by Whisperin Al at 9:30 am 1 comment:

I finished basing the latest addition to my Indian Mutiny collection a couple of weeks ago but didn't get around to taking any pictures.  But now here they are: 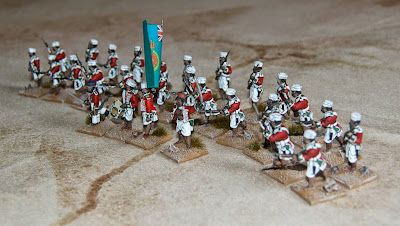 The figures are from Mutineer Miniatures, they were painted by Roger, based by me and the flag is from Grimsby Wargames Society.
Posted by Whisperin Al at 9:09 am 12 comments: