We tried out the To the Banners rules by Partizan Press at the club last week. Bronze picked these up at SELWG last year IIRC and he umpired the game. The rules embody some interesting mechanisms, particularly around initiative and artillery which make good use of the d6. It did, however, become clear that the rules were really designed for two player games rather than multi-player ones (unless you enjoy lots of downtime) and that some of the mechanics could have done with much better explanation in the booklet. Added to that units have to take some serious punishment before being eliminated which isn't really compatible with our limited playing time.

The rules did simulate the difficulties in co-ordinating units and the effect of leaders and the artillery was ineffective but fun.

Overall they are nicely presented and gave a fun game but you need to persevere with some of the text and keep to two players. Given that we liked the rules I suspect Bronze will be trying some amendments to cater for multi-player games.
Posted by Whisperin Al at 12:03 pm No comments:

Email ThisBlogThis!Share to TwitterShare to FacebookShare to Pinterest
Labels: medieval, miniatures, to the banners 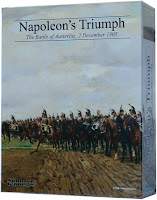 Impressed by Bonaparte at Marengo (BaM), I just picked up a copy of Simmons Games latest release, Napoleon's Triumph (NT) from Gameslore. NT is a development of the BaM system for the Battle of Austerlitz. The board is nearly 3' x 4'!

As with BaM, NT divides the map into polygons with defined "approaches" which restrict combat and/or movement. It also uses a diceless combat system and hidden unit strengths but now adds leaders.

I am really looking forward to giving this one a go!
Posted by Whisperin Al at 11:39 am No comments: 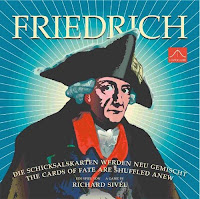 I managed to pick up a copy of Friedrich at Orc's Nest last week. It's a boardgame about the Seven Years War for 3 or 4 players (though there are two 2 player scenarios) pitting one player (as Friedrich) against the others, although only one player can win.

On first sight it looks like a cross between a Euro game and a Wargame with the wooden pieces, control chits and point to point map, and the mechanics repeat that approach - conflict but with a pretty streamlined system (combat using cards). The historic flavour is enhanced with the use of the Fate deck which introduces real events into the game - some of these eliminate individual nations but all the allies have a fall back to work with.

I've only managed to read the rules so far but it looks very interesting - particularly as the hybrid nature of the game should give it a wider appeal than my more traditional wargames.
Posted by Whisperin Al at 5:38 pm 2 comments:

My pre order copy of Athens & Sparta by Columbia Games finally arrived today. I've only had chance to unwrap and open the box (so I still have the unrivalled fun of the stickers ...) but the game certainly looks interesting. Obviously as a Columbia block game it has the usual step reductions and it's card driven with the map being hex based - all of which we have seen in other of their games. The productions values are the same as their other games with the same file box and sleeve arrangement with an unmounted board etc. but that's only to be expected.

I could quibble about the release delay (1 month) and the lack of any sort of communication from Columbia about that (I found out from checking their website) despite them having my email address and moving from a "Coming in September" to a "Coming Soon" message without warning. But now that I have it this seems a little churlish.

Expect my first impressions once I've got myself into the appropriate Zen state to do the stickering and run through the rules...
Posted by Whisperin Al at 8:28 pm No comments:

Have I found Solomon Kane?

In my search for a suitable Solomon Kane figure, Lenin pointed me to Black Cat Bases who have this "Vampire Hunter" in their "Civilians, Townsfolk and Mercenaries for hire" range: 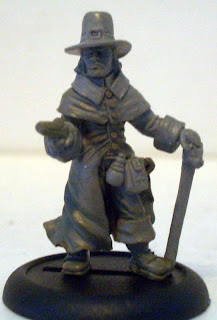 He certainly looks the part to me!
Posted by Whisperin Al at 8:48 am No comments:

Managed to get an AK47 game in at the club on Thursday. Set in the Republic of San Guano my "rebel" forces (I like to think of them as freedom fighters - though not exactly sure whose freedom they're fighting for - wallet fighters might be better!) were narrowly defeated by the illegitimate Government forces (only 8 points in it IIRC).

What the game did do was remind me what I do and don't like about AK47 Republic. The production values are hardly top notch - dodgy coloured pages (presumably to reduce the chance of photocopying), poor layout, pretty basic illustrations and abysmal proof-reading. There are plenty of fun ideas (and some silly ones) along with a simple set of basic mechanisms which are easy to pick up. But the random scenario generation does leave a lot to be desired (you can be defeated by a few dodgy dice rolls for unit arrival - which given my reputation for dice rolling ain't great!).

But overall the core rules give a fun game (as long as you recognise what they're for!). Reflecting back on the previous Metal Storm game it did feel similar (which is not surprising given that it's based on AK47) but AK47 is still a lot less fiddly.
Posted by Whisperin Al at 8:38 am No comments: