Since I seem to be better at starting rather than finishing projects I have decided to categorise them to help me focus. So far I'm thinking of the following five project stages:

Stage 1 - The Idea
I've had a great idea for a new project but haven't actually done anything about it other than some superficial research on the internet or in my existing library.

I regularly have a very, very large number of projects in this stage!

Stage 2 - The "Investment"
I have actually spent some money. It might just be on more research material or something more substantial in the way of figures, terrain etc. But at least I am committed!

Stage 3 - The Construction
So by now I've actually been forced to do something more than simply buying stuff. Planning, building, painting etc. i.e. a significant commitment of time rather than just money. These are "real" projects.

Stage 4 - The Pilot
At this stage I have something I can actually put onto a table. So the figures, terrain, rules and scenario(s) are in place, at least sufficiently to enable a game to be played. There is still work to be done to finish the project but I am seeing some return on my "investment".

Stage 5 - The Completion
I'm not sure if any project really reaches this stage but I'm considering this one to mean "complete" as originally envisaged and that any further expansion etc. will be considered to be a separate project (and so we go around again!).

My next task to actually list out all the projects in each category - that may take a little while! I can then prioritise them and, hopefully, 2010 will see more progress...
Posted by Whisperin Al at 7:43 pm 2 comments:

I would like to take this opportunity to thank you all for spending your valuable time looking at my witterings!

I am hoping that Santa will bring me some gaming related presents and so I hope to have some interesting things to post about after Christmas.

May I wish you all the very best for the festive season and for a happy and prosperous 2010 (with lots of gaming)!

In case you didn't know the Hogswatch card above is by the fabulously talented Paul Kidby.
Posted by Whisperin Al at 10:14 am 3 comments:

Even though 2009 isn't quite finished I'm in the process of trying to plan the games for Lenin's next visit in January. At the moment it's looking as follows:

28mm Crusader Skirmish
A chance to try out the Two Hour Wargames' CR3.0 - Swordplay rules (which are available as a free download by the way) to see if these are worth pursuing as our future "pointy stick" skirmish rules. It also gives me an opportunity to get my Gripping Beast crusader figures out again which will be nice, along with the new desert buildings I've picked up recently.

28mm Early WW1
A conversion of the second scenario from the SkirmishCampaigns Rommel's Road to Verdun booklet to the Two Hour Wargames' Nuts! rules (it's not quite big enough for the Lardies' Through the Mud & the Blood I suspect). This will be another chance to get my Renegade WW1 Germans and French onto the table (ah Les Pantalons Rouge!)

15mm Early WW2
I'm going to use this as an opportunity to finish off some more of my Peter Pig 15mm figures and am going to try running a larger game than normal using Spearhead (with the Germans suitably toned down!)

Lenin is indicating Through the Mud & the Blood (may be 28mm Normandy or 15mm Lebanon), Bag the MiG and Fantastic Worlds (which could be an outing for his Star Trek figures). But, as always, everything could change in the next few weeks!
Posted by Whisperin Al at 11:42 am No comments:

The TooFatLardies have released their latest seasonal special packed to the gunnels with stuff for almost all their sets of rules.

This time we're being treated to over 120 pages of fascinating content including:
It's available as a PDF download from their website for a fiver.
Posted by Whisperin Al at 9:17 pm No comments:

Email ThisBlogThis!Share to TwitterShare to FacebookShare to Pinterest
Labels: too fat lardies

The Gathering Storm Part One - Scotland and the North

Solway Crafts and Miniatures have recently released their second source book for their alternative history setting 1938: A Very British Civil War. Originally intended to be a single volume they had so much interest that they decided to split it in two and so this is Part One covering Scotland and the North with a second part expected early in the new year.

This is a 50 page full colour production with 15 sections written by a variety of contributors interspersed with pictures of miniatures, flags and the the like. Six pages in the centre of the booklet are given over to a photo gallery.

The contents are as follows:
A couple of small scenarios are also included.

The layout and style is a little inconsistent with a mixture of two and three column formats with photos and text inserts. Each page has a coloured background (similar to that on the cover) with the text boxes being darker and the photos held in by simulated tabs.

The content is the product of enthusiasts who have taken the ideas in the original source book and developed them through research, their own inventiveness and tried to provide a world which allows them to use the figures available.

It was always going to be difficult for this booklet to make the same impact as the first. The whole concept of the alternative timeline carried the first source book and more than made up for its weaknesses. This volume just cannot compete on the same basis, it is simply fleshing out that original idea albeit in some interesting and inventive ways. The main advantage of the original was that it provided many creative seeds which you could develop to fit your own vision and, whilst this new volume does suggest the book is "a guide but not the final word", it does feel more limiting than the first.

This is an interesting read and there are certainly some useful ideas in it. Whether it is worth the £12 plus postage is really a question of whether you need those ideas.
Posted by Whisperin Al at 8:59 am 4 comments:

Email ThisBlogThis!Share to TwitterShare to FacebookShare to Pinterest
Labels: 1938

Musketeer Miniatures have posted some pictures of some of the new BCW figures which should be coming early next year:

and a Militia anti-tank rifle team:

As usual both sculpted by the inestimable talents of Paul Hicks.
Posted by Whisperin Al at 12:18 pm No comments:

Apparently the next addition to Copplestone's interwar tanks will be a Vickers Independent:

Who can say no to FIVE turrets?!
Posted by Whisperin Al at 7:55 pm 5 comments:

Email ThisBlogThis!Share to TwitterShare to FacebookShare to Pinterest
Labels: 1938, copplestone 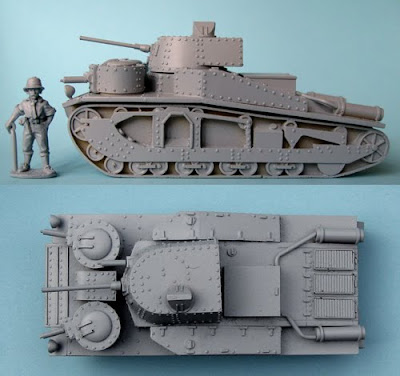 Only three were actually built but in our alternative 1938 world who knows?

It is a little on the expensive side but given the size and unusual nature of it possibly not surprisingly so.
Posted by Whisperin Al at 7:44 pm 1 comment: