Here are my photos from the wargames weekend:


Lenin has also posted his photos on Lenin's Library.
Posted by Whisperin Al at 8:04 pm 2 comments:

Our final game of the weekend was a first outing for Lenin's Star Trek figures using Rattrap's Fantasic Worlds rules. Here's the brief:

The USS Hammersley, a scout class vessel, under the command of Commander Michael Flynn was on regular patrol on the edge of known space, when it suddenly detected a previously un-catalogued signal emanating from the planet P3X-866. This planet has only been surveyed from orbit and though it is M Class, no signs of current intelligent life were detected. However, ancient and uninhabited ruins were observed from orbit, so it would seem that the planet once supported intelligent life. Given that the majority of the planet’s surface is now covered in water, hence its unofficial name of Poseidon, the current theory is that rising sea levels eventually drowned this long dead civilisation. Poseidon is earmarked for a full planetary survey sometime in the next five years.

Using is own initiative, the maverick Commander Flynn beamed down to Poseidon with a small landing party to investigate this unknown signal, but on landing, the party discovered that the signal seemed to be jamming their communicators, thus preventing contact with the ship or beaming back. Lieutenant Blake, the Hammersley’s Science Officer, suggests that they need to locate the source of the signal and somehow turn it off, but before the landing party can start their search, the realise that they are not alone… 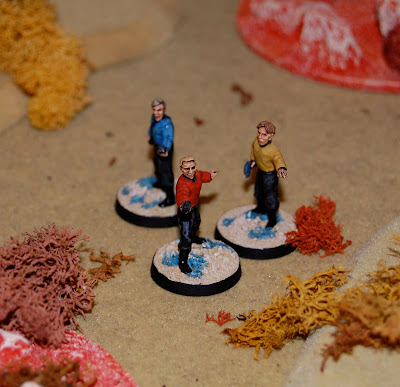 I played the Star Fleet landing party stranded on the planet and we began the first of the three "acts". Whilst searching the alien ruins we heard gunfire and, on investigation, discovered some ape astronauts who were also stranded on the planet's surface. In addition, we discovered a hostile indigenous species of "crabman". These creatures were quite hostile and pretty tough and our phasers didn't seem to have much of an effect on their carapaces.

Between us and the team from the Ape Astronautical and Space Administration we managed to triangulate the position of the signal which was interfering with our instruments and moved off in that direction.

Moving through the ruins we encountered some quicksand and several more crabmen but managed to find the entrance to the structure from which the signal was emanating.

Moving inside we were lucky enough to discover some buried controls for the alien device but not before stumbling upon some more crabmen. Our teams split up and tried to hold off the crabmen whilst the others uncovered the controls. We managed to scare one of the creatures away but another was quite a different proposition and was it took both the Captain and the Science Officer to keep it occupied. With the controls uncovered we just needed to discover how they worked. Fortunately the apes discovered some tablets (no not iPads!) with some instructions but unfortunately another crabman appeared. A running battle ensued with all of te Star Fleet personnel but my First Officer becoming incapacitated and the apes nearly suffering the same fate. IN a nail biting conclusion the apes managed to activate the controls and a landing party beamed down from the Hammersley just in time to save the day!
Posted by Whisperin Al at 9:17 pm 1 comment: