Having already fielded my Kent Militia I felt they desperately needed a standard to rally to so prior to buying the official Musketeer standard bearers, I converted one of my Militia riflemen whose rifle barrel had broken.  Here he is with the rest of the command group: 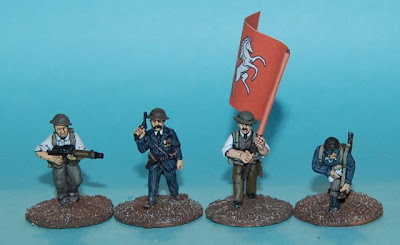 I have now expanded my VBCW collection further with a completely new faction - the Anglican League. Here is the Musketeer Miniatures command pack: 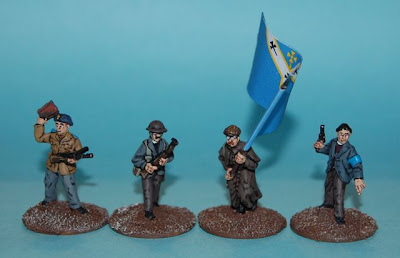 Posted by Whisperin Al at 7:28 pm No comments:

Another addition is "General Clearwell" from the Artizan Designs Thrilling Tales range: 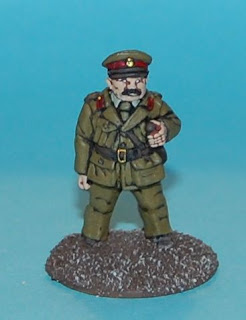 The Long Arms of the Law

I have just added a few Artizan armed police to my Musketeer force for VBCW:

Apologies for the lack of posting recently; however, it has been a fair reflection of the amount of gaming related stuff I have been doing!

Fortunately I have had a little more time this weekend and so I have started to make some more progress with a couple of projects whilst being distracted by yet more ideas.  First the progress:

Dahomey 1892
I am just in the process of basing up my Dixon French Foreign Legion figures and some opposition for Dahomey.  The figures are a little bit of a mixed bag, with some being lovely sculpts but a couple of the others do look a little odd.  I have about a platoon of French with mules and bearers and around 40 or so Amazons and other Dahomeans (I plan to have some casualty recycling).

I am a little uncertain as to which rules to use.  Colonial Adventures is an obvious one but I would like to have a different feel for this game to some of my other Colonial outings.

Dieppe 1942
The Foundry Commandos I picked up on eBay have been added to the two sections I already had and are now ready for basing.  I managed to pick up a couple of LCAs from Grand Manner before their recent price rise too.  This should allow me to cover the Orange Beach operation.  Next on the list are beach defences and then the assembly and painting of the artillery for the main objective.

VBCW
A few more Artizan armed police are about to join my existing Musketeer force and with a few Anglian League figures also to be based I can see a game in the offing.  I am just wondering about flags now...

WW1
Having been reasonably pleased with my first attempt at a trench, I decided I might like to expand that project to include communication and support trenches.  So far I have just laid them out but I am currently wondering about the balance between aesthetics and usability regarding the sections between the trenches - shall I keep them relatively flat (with the option for separate shell craters) or build more in? Decisions, decisions...

Pictures will be following.

As to potential new projects, I have been distracted (as usual) by more figures prompted by a couple of the half price Foundry books I picked up.  Mutineer's 28mm Indian Mutiny and Pontoonier's 3rd Anglo-Burmese War ranges both have potential so I am currently reading up on both to see which might get bumped up the project list.
Posted by Whisperin Al at 1:49 pm 1 comment: