I managed to pick up a copy of Duell, the fencing card game, which is a republishing by Ravensburger of En Garde by Reiner Knizia, from eBay. Having read the various comments on BoardGameGeek I used the En Garde rules and tried a few games with my wife, starting with the Basic Game and moving on up through the Standard Game to the Advanced rules.

The game is very simple in concept a linear track is placed between the players and pawns placed on either end of it to represent the fencers. Each player is dealt 5 cards from a deck of 25 (5 sets of values 1 to 5) and then plays the cards in turn to advance down or retreat back up the track or to attack their opponent. With the advanced rules, which include advance and attack and defensive retreats it is a really fun game that actually manages to give the feel of fencing despite its simplicity.

The production values of the Ravensburger version are fine but if you are looking for a real visual feast you might want to check out the version of En Garde being produced by Ferti (although it doesn't contain the English rules so you'd need to download those). Personally if I want to improve the look I'm going to fish out my Redoubt Musketeer figures and I'd also like to work out a way to get it into a miniatures game as it's the best fencing simulation I've found so far.
Posted by Whisperin Al at 8:56 am No comments:

The Too Fat Lardies have released their latest seasonal special just in time for Christmas. Weighing in at 133 pages it's the usual excellent mix of supplements, scenarios and articles for the Lardies various rule sets.

I haven't been through the whole thing as yet - it only arrived a couple of days ago but I've found from the previous seasonal specials that, even if you don't have the rules in question, all the articles and scenarios and an interesting read. It's sure to keep my occupied over Christmas and for only £5 for the .pdf it's not to heavy on the pocket.
Posted by Whisperin Al at 9:41 am No comments:

Email ThisBlogThis!Share to TwitterShare to FacebookShare to Pinterest
Labels: too fat lardies

Which is more Important: Your Morale or Your Troops' Morale?

We played a Late Roman skirmish last week using Pax Romana and the game raised some interesting questions for me. One related specifically to the rules, and more of that later, and the other to the issue of morale. Crazy Dave was playing the Franks raiding inland from the Medway and I was fielding the Romano-Brits defending (later ably aided by Gav and Ben when the reinforcements arrived). The game started slowly with Dave picking his way through the early morning fog and eventually spotting my settlement but not before I'd spotted him and nipped off to inform the local garrison. Dave advanced his veteran troops towards my village, which was only defended by armed farmers and it looked like it was all going to be over pretty quickly. But when my lone archer loosed a couple of shots Dave decided to retire to the woods to regroup. By the time he'd got himself organised a patrol from the garrison had arrived and the fight looked like it was going to be a little more even. Unfortunately for Dave his reputation for unpredictable dice rolling was well earned and getting into the village was pretty heavy going for him. But he'd awung some of his troops in a flanking manoeuvre which surprised us from the rear and despite the patrol it started to swing Dave's way. Then more reinforcements arrived from the garrison and we all thought it was over for Dave. But despite the odds Dave moved onto the offensive and charged into the approaching units some of which broke and Dave's vets made their morale rolls. After a lot of heavy fighting Dave was eventually beaten but at a huge cost to the locals.

This all made me think, the game would have been quite different if Dave had used his aggression when advancing on the village in the first instance and had someone else been playing his troops later when the reinforcements arrived they could have simply run for the hills (which given the odds was what we were expecting!). It really highlights that no matter the morale rules for the troops the morale of the players is just as if not more important. It also goes to show that no matter what the odds any game with dice can go either way!

As to the rules one of the things that helped Dave was his veteran troops which get more actions than the less experienced troops. On reflection we were concerned that the veterans were getting rather too much of an advantage from this which was difficult to justify logically. Ben suggested using alternatives including getting several activation cards and being able to choose the highest thus allowing them to react faster. Bronze is now pondering so there may be a revised version coming.
Posted by Whisperin Al at 9:19 am No comments:

The Chain Reaction 2.0 rules are now being offered as a free .pdf download by Two Hour Wargames! These are the basic rules upon which the majority of Two Hour Wargames other sets like Nuts! and FNG are based.

The rules cover all the reaction test mechanics and provide stats for a variety of weaponry, so they make a great set for any modern skirmish.

If you haven't tried the Two Hour Wargames style rules I'd give them a go (you can't complain about the price!). They do have a learning curve but once you're over that they are excellent.
Posted by Whisperin Al at 7:01 pm No comments:

Out of the Box: Napoleon's Triumph

Having got my copy of Napoleon's Triumph from Simmons Games earlier this week I decided to get it out of the box and have a look at both the components and the rules. The pieces are almost identical to those from Bonaparte at Marengo (BaM) but there have been some slight printing alignment issues with the unit markings being printed slightly offset, but this doesn't affect game play. The Leaders are designated by metal flag markers which sit on top of the unit blocks, these require stickers to be affixed for both sides of the flags and the Leader's name (oh great more stickers!). These are easily done and set up the game looks something like this: 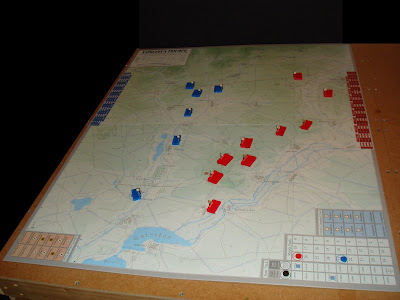 With this slightly closer view you can see the locale polygons designating the areas on the map: 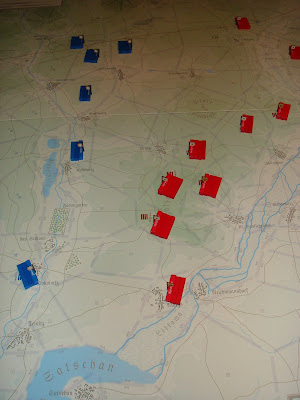 There are some differences with the rules from BaM but given the subject matter that's not surprising but it looks like a development rather than a rewrite and they continue the streamlined approach. Now all I need is an opponent - this game doesn't have a high SAF (Spouse Approval Factor) and even if I could persuade her I suspect she'd consider it too "thinky"!
Posted by Whisperin Al at 12:46 pm No comments:

Given that the focus of this blog is supposed to be gaming (I know I get a little distracted at times) - decided to create a new blog to cover my other main interest, technology. WebWitter is my new blog on which I ramble on about gadgets, technology, movies, tv and such like. Have a look, assuming you can stand more of me wittering on!
Posted by Whisperin Al at 9:05 am No comments:

NUTS! Available at a discount 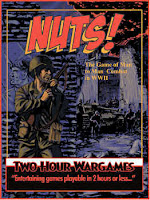 Nuts! - one of my favourite sets of rules from Two Hour Wargames is their featured game this month. Which means you can get it for US$5 less than the usual list price - so the .pdf is only US$12.

All the Chain Reaction 2.0 based rule sets have a bit of a learning curve but once you get over that The reaction test system provides a different but very effective simulation. I've yet to find another set of rules at this level which gives you the "feel" that Nuts! does. It leans more to the realistic than the hollywood version of WW2 but that is what I was looking for anyway.
Posted by Whisperin Al at 8:42 am No comments: