Through the Mud and the Blood Playtest
Having read the new Too Fat Lardies rules I was keen to get them to the table to see how they played. I created a simple scenario with a single section, an HMG team and two big men (one level 2 and one level 1) of the BEF in trenches facing an assault by four gruppe of Germans with three big men (one level 3, one level 2 and two level 1). I had rated all as veterans with good morale and included the Mad Minute card for the BEF.

Both sides started on blinds but as soon as the first German unit was spotted the HMG opened up but to, much to our surprise, not much effect; however, the next round of firing changed that! Unfortunately for the Germans their big men were clearly leading from the front as they quickly suffered casualties from the lower ranks and didn't get replacements. By the time they had managed to cause some damage to the BEF their force was so depleted and had accumulated so many shock points that they began to withdraw.

We learned a lot from the scenario. Firstly that I hadn't balanced it terribly well! Secondly, that whilst there are elements from Sharp Practice it has enough differences and period flavour to give a quite different game. And finally, that it's fun!

This will certainly be on the agenda for the next visit.

A Town Called Malice
We then moved on to a Wild West scenario using my new Brigade Games figures and the Two Hour Wargames Six Gun Sound rules (the original ones rather than the Blaze of Glory version).

After a drunken brawl at the Jewel Saloon Sheriff Ballcock had locked up Rick Buckler, one of the members of the Weller Gang. Of course the gang were having none of that and came into two to spring Rick. 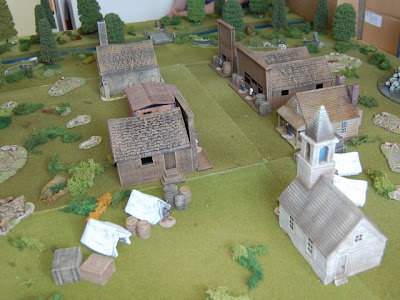 We managed to play the scenario twice. The first time with me as the Weller gang and Lenin as the Sheriff and the second with the roles reversed. My gang didn't last very long as the Sheriff managed to get the drop on each of them and polished them off with a single shot each! I didn't fare too well the second time around either. If it hadn't been for the intervention of the townsfolk, in the shape of Adversity Jane and Al Cursengine, the game would have been over very quickly. As it was the Wellers got sprang Rick but left their leader lying in the main street of Malice.

Marathon 490BC
We finished the day off with a game of Commands & Colo(u)rs Ancients with a scenario from the first expansion Greece vs the Eastern Kingdoms. As always it was an entertaining game.

Posted by Whisperin Al at 6:01 pm No comments:

As you may have spotted from Twitter last weekend was another of Lenin's visits and we managed to pack quite a few games in.

On Saturday we decided to use my terrain mat and so two winter games were on the agenda:

Lake Kokkojärvi, 30 November 1939, 15:00 hours
I adapted a scenario from the SkirmishCampaigns Winter War booklet for the Two Hour Wargames reaction system. We decided to give the new Chain Reaction 3.0 rules a try to see how they differed from the standard Nuts! WW2 rules which we normally use. 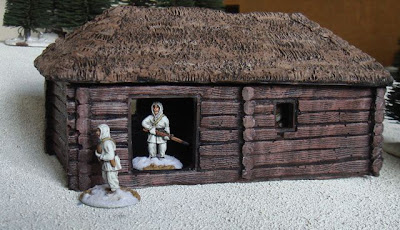 That gave me a chance to not only use my newly painted 28mm Bolt Action Russians but to get my Brigade, Bolt Action and Baker Company Finns out again.

The scenario was set shortly after the initial Russian invasion and the Russian objective was to try to prevent the smaller Finnish force from withdrawing off the table. The Russians tried to advance across a frozen marsh in order to outflank the Finns but unfortunately the ice cracked and they were forced to seek a safer route. Their main force was spotted by the Finnish LMG team who managed to keep them pinned down and another flanking manouver by the Russian maxim team was halted as they tried to set up. The main squad of Finns then began a withdrawal to the ridge at the back of the board and it was then a race to see whether the Russians could catch the LMG team before they joined them.

In hindsight when I scaled down the scenario to suit the figures I had available I gave the Russians a much harder task as they would have been able to deploy another force to pin down the Finns giving them a much more challenging withdrawal.

The new Chain Reaction rules are indeed laid out more clearly (but obviously don't include the WW2 campaign information that Nuts! has) and so will form the basis of our skirmish games from now on.

In the afternoon we moved on to a Fantasy Napoleonics game to allow Lenin to table his Alternative Armies figures and give the Too Fat Lardies' Sharp Practice another outing. 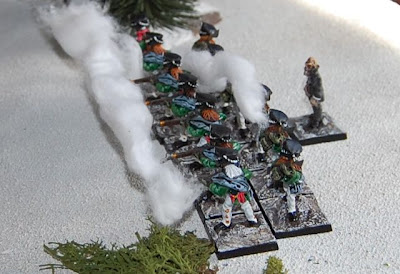 The scenario consisted of three units of zombie infantry and one unit of zombie Cossacks assaulting two units of elven infantry in their camp. We started the game on blinds with the elves having posted sentries and initially things went well for the undead. But then the elves revealed their artillery piece and one of the zombie units tooks a serious pounding. The zombie unit which deployed on the elves' flank was held up by fire from one of the houses and, whilst the cavalry managed to outflank the elves on the other side they didn't get the chance to activate before the elves had withdrawn into the camp. The cossacks then moved to outflank the elves once again and then inflicted a devastating charge. The breakthrough allowed them to chase the artillery crew away too. Then the elven light infantry returned from a scouting mission and managed to inflict some serious damage on the flanking zombies. A further charge from the cossacks was easily seen off as the light infantry were still in the woods.

With the cossacks spent and two zombie units having taken a beating the undead withdrew leaving an elven force which was in an equally bad way.
Posted by Whisperin Al at 8:29 pm No comments: 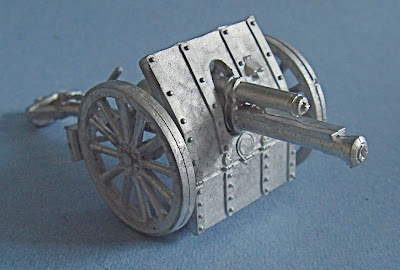 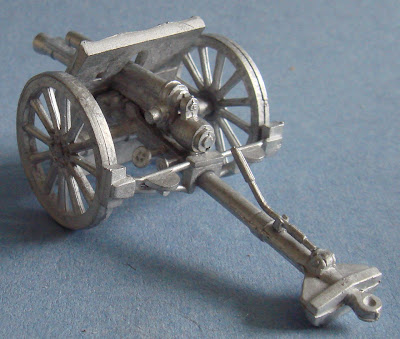 It's a nice clean casting with virtually no flash at all and assembly was relatively straightforward.
Posted by Whisperin Al at 8:37 am 1 comment:

Here's the next vehicle on the assembly line, the Austin armoured car from Sloppy Jalopy: 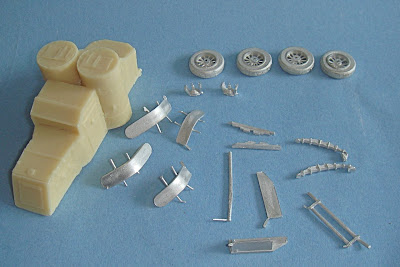 As you can see the main body is in resin with the balance being white metal parts. The resin casting isn't as detailed as white metal or the resin vehicles I have from Force of Arms for example. In addition, there are no preformed holes for the various parts like the mudguards, something the Force of Arms vehicles did have. Whilst an assembly guide was provided it isn't entirely obvious where some of the parts should be fixed (or how given the lack of holes) and the side guard and step have only a small flat area for gluing which may not make for a strong bond.

I report back once I have assembled it.
Posted by Whisperin Al at 8:01 am No comments:

Here's a quick picture of the Musketeer Lancia armoured truck straight out of the bag: 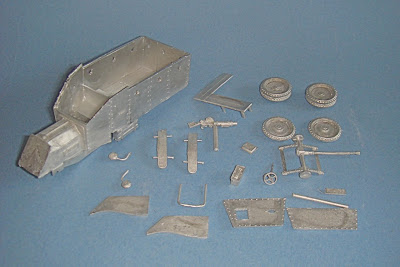 Quite a few parts as you can see.
Posted by Whisperin Al at 9:13 am 6 comments:

Battle for the Heights of Carillon, July 1758

For the first time in too long I actually hosted a game at the club last night. I chose a battle from the French & Indian War, the Battle for the Heights of Carillon (or Ticonderoga if you prefer) from July 1758.

The game gave me an opportunity to dust off my 15mm Essex figures and use my new Terrain Warehouse Vauban defences to use as Fort Carillon along with my own breast works for those on the heights. I chose the Habitants & Highlanders rules by the Canadian Wargamers Group as they are easy to pick up and allow for some manoeuvring on the table.

Whilst both sides had similar numbers of units the British had a number of substantially larger ones including, in particular, the 42nd Highlanders. The British objective was simply to reach the fort, of course the French were to have other ideas.

The main challenge for the French was that, whilst they were able to place works on the heights, there was sufficient room on the table for them to be outflanked by the British. Indeed, with the French safely behind their works, the British did start to try to move to the Northern side of the heights. They deployed with some provincials in front in skirmish formations followed by the British line but with a signficant part of the force, including the Highlanders, moving to bypass the heights.

Ben, playing Montcalm the French commander, decided to be bold and advanced one brigade out over the works to swing round and attack the British flank. He also advance to challenge the British skirmish line which, with some spectacularly bad luck with the dice, crumbled. The British were then pinned by the French, unable to advance past them without exposing their flank, and left to attack the main French position on the hill.

Despite the French advance there was some interesting replay of history with the 42nd attacking up the hill against determined French resistance; however, they took some substantial casualties and, in the end, their army morale broke and the game was a victory for the French (as it was historically).
Posted by Whisperin Al at 8:37 am 6 comments:

With a few days off around Easter I thought it might be an idea to sort out the games room. As usual I had massively underestimated both the amount of stuff I have and the scale of the task.

So here I am, about half way through, having sorted the wheat from the chaff (the latter currently in the garage awaiting either an eBay posting or the dustman) and reorganised what remains (almost). I fully intend to actually label the boxes this time (especially as my memory seems to be getting progressively less reliable) and eventually compile a complete inventory of everything I have.

Surprisingly, I haven't found too much that I had forgotten I had but have found rather too much that I haven't done much with. As a result I am going to re-examine some of my priorities in order to get a couple of stalled projects to the table this year. Mind you it will come as no surprise that the ones which have stalled have been those missing one of the essential ingredients (figures, terrain, rules, scenarios) and I will need to fill the gaps in order to move these ones forward.
Posted by Whisperin Al at 7:03 pm No comments:

I put in a large pre-order to Front Rank for collection at Salute. Given the size I couldn't check it at the show so it had to wait until I got home. Much to my disappointment there were 6 figures missing.

I emailed them straight away and got a response the same day and got the figures in the post on the following day.

My test for customer service is how they deal with things when they go wrong (after all everyone makes a mistake now and then) and Front Rank passed with flying colours!
Posted by Whisperin Al at 6:27 pm No comments: