Managed to get a game of Nach Paris! (a Franco Prussian Fire & Fury variant) in on Thursday as the Prussians. A great game but it did reveal the issues around modifying one rule set for another period. Some of the key mechanisms in Fire & Fury work on the basis of equivalent ranges for musketry in the American Civil War. Clearly this isn't true of the Franco Prussian war where ranges and fire power differed significantly between the opposing forces. So do you introduce differential ranges and, if so, how do you deal with the "retreat beyond enemy musket range" results? The Fire & Fury mechanics clearly have a level of abstracting and thus introducing a new variable can create some problems which aren't immediately apparent.

As it was the game was great fun and the weapons issues have been taken away for a bit of tweaking. Unfortunately the result was relatively historic with a French "victory" but I'll put that down to a lack of aggressiveness on my colleague's flank (of course a lot fewer duff dice rolls on my part might of made a difference too!)
Posted by Whisperin Al at 2:16 pm No comments:

Email ThisBlogThis!Share to TwitterShare to FacebookShare to Pinterest
Labels: miniatures

All Quiet on the Blogging Front

Sorry that there haven't been any posts lately - I have been down with the 'flu and hence haven't had much time for blogging or gaming. Having recovered I'm in the process of progressing a couple more reviews.
Posted by Whisperin Al at 9:17 am No comments:

What with card games, board games and wargames we managed to get 18 games in over the weekend. Montjoie! got a second outing, this time at skirmish level (and much better for it), Division Commander for the first time and Rackham's AT-43 saw the tabletop.

For less serious stuff WizKids' Rocketmen: Axis of Evil got a try and so did Heroscape (it may be a toy but it's definitely fun!) plus Ticket to Ride, Cleopatra and the Society of Architects along with Shogun.

So expect some reviews shortly!
Posted by Whisperin Al at 8:22 pm No comments: 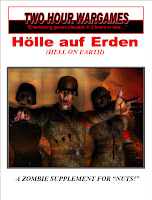 Hölle auf Erden (Hell on Earth) is a zombie supplement for Nuts! from Two Hour Wargames. It provides a simple Weird War 2 background to explain the alternate history for late in the war to allow zombies to be fielded.

It effectively adds some of All Things Zombie to the excellent Nuts! World War 2 rules which are based on Chain Reaction 2.0 which I reviewed back at the beginning of December.

Hell on Earth allows the zombies to be controlled or un-controlled and, as with All Things Zombie, the latter works well for solo play.

Hell on Earth is available in both .pdf and hardcopy formats at $5.00 and $8.00 respectively from Two Hour Wargames.
Posted by Whisperin Al at 9:35 pm No comments:

Due to the number of photos rather than compile another Video Review I've simply uploaded the photos to Picasa: The Wargame Shed - Figure Review No. 3
Figure painting is by Lenin.

This is a superb range from Mongrel Miniatures with excellent sculpting and come highly recommended.
Posted by Whisperin Al at 12:45 pm No comments:

We welcomed the New Year in with some Days of Wonder games - Cleopatra and the Society of Architects and Pirate's Cove. I'm getting a bit long in the tooth for a booze fest anyway!