Work kindly provided me with an O2 XDA a few weeks ago so that I could get email on the go. Now me being a bit of a gadget geek thought woohoo this'll mean I can dump my palm and mobile for a single device. Unfortunately the XDA is a compromise of the worst kind - yes it's got load of features BUT and it's a big but - the battery life really sucks! If you really conserve it you might get a day and a half - compare that with my Nokia mobile and Palm Zire both of which would be well into their second week with the same usage. In addition the XDA is saddled with Windows Mobile - nice idea but oh dear is it flaky - it once crashed four times in a hour!

Hopefully I'll be swapping it for a blackberry soon and that can't be as bad - can it?
Posted by Whisperin Al at 6:28 pm No comments: 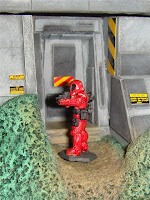 The 5150 game we played over the big game weekend was another trial for the rules (as we were running it wrong previously) to try them again. This was human vs human so we need another trial to check out the alien specific reaction tables though. Here's the briefing:

Location: Arcturus, the Arcturus Loop (between the Borodino and Weyland Yutani Sectors)

For years the Arcturus Loop has provided a route for trade (both legal and illegal) to bypass the Core Systems. Both the ICC and the UNSC have failed to halt or regulate this traffic and this has been a source of some tension amongst the Nation States and the Corporations. The Neu Swabian League (NSL) have finally lost patience and taken direct action to deal with this problem. They have launched an invasion force bent on taking direct control of Arcturus itself and hence the loop. The initial assault wave was formed of elite teams of Sturmtroopen who have been deployed against specific strategic targets in advance of the main invasion force. One such target was Ibn Ihmael, a key control complex for the Arcturian planetary defence and communications system. The surprise assault has left the NSL in control of the complex but the Planetary Defence Forces have planned a counter attack to retake the complex and regain control of the planetary defences, possibly their last chance to halt the main NSL invasion force.

The NSL force consisted of two 5 man squads in Hard Body Armour with a variety of weapons. They were generally Rep 4 led by Rep 5 squad leaders and had the advantage of a fortified position (albeit with a perimeter too long to properly defend). The Arcturian PDF was a squad of Rep 3s in Soft Body Armour led by Rep 5s again.

A initial probe by a PDF scout quickly revealed the NSL positions (recon by death) but the first PDF assualt was quickly routed by NSL fire and the entire squad legged it for home. A more tactical approach had the NSL pinned down by one squad whilst the other attempted a flanking manoeuvre. The NSL squad slowly lost out to the greater PDF numbers and following a quick bypass being run on the main gate the outer defences were penetrated.

A short firefight between a second NSL fire team and the PDF ended prematurely with the judicious use of an anti-air missile by the PDF. The PDF advanced towards the command bunker only to be pinned down by the remaining NSL troopers. A brave assault by a PDF trooper with a flame unit failed by concentrated fire some his buddies took out the NSL trooper.

The final assault on the bunker was quickly resolved with the NSL officer being cut down before he could destroy the comms equipment and the NSL shuttle pilot thought discretion the better part of valour and bugged out.

It was a fun game (around the two hours - as you might expect) and reinforced our view that the THW system is a winner.

Our SF universe is a melding of the Aliens RPG and GZG backgrounds - more details can be found on the Encyclopedia Galactica.
Posted by Whisperin Al at 3:52 pm No comments: