Possibly the most bizarre ATW in the world? 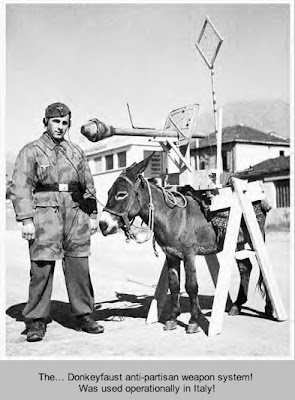 I found this, along with some other unusual but slightly less weird weapons, at http://www.greyfalcon.us/Weapons.htm.
Posted by Whisperin Al at 10:29 am No comments:

We managed to get Thebes to the table a couple of days ago for the first time. As with Shogun, the other Queen Games product I have, the production quality is excellent. The theme is turn of the 20th Century archaeology with the players travelling around Europe, the Mediterranean and the mid-East researching ancient civilisations, conducting excavations and then exhibiting their finds.

There are a couple of novel mechanics which fit in very well. The "currency" of the game is time with each action taking a varying amount and the players' counters being moved along the time track appropriately (the game is played over 3 years with time measured in weeks). The key being that the player who has used the least time acting first. This mechanism works really well with valuable research actions taking a long time. The second mechanic relates to excavations with each civilisation having a different selection of artefacts tokens and blank tokens placed in separate bags. When you carry out an excavation you count up the amount of knowledge you have about the relevant civilisation and then decide how many weeks to dig for. By consulting a nicely produced little wheel you determine how many tokens you may draw (unseen) from the bag. The blank ones are then returned making subsequent visits progressively less likely to find anything.

With nice production, a well integrated theme and not too much complexity, Thebes turns out to have been a good choice - it got the thumbs up from my wife which is always a good sign.
Posted by Whisperin Al at 4:20 pm No comments: