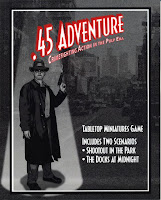 .45 Adventure is a set of miniatures rules by Rattrap Productions for Crimefighting Action in the Pulp Era. These rules have spawned several supplements and versions for other periods including Fantastic Worlds (Pulp SF) and Gloire (Swashbuckling Adventure).

Each figure is assigned various stats familiar to anyone who has played RPGs; however, these have been allocated names suitable to the genre - shivs (melee), heaters (shooting) etc. These are allocated to one of four hit locations (head, torso, arms and legs). When hits are taken in these locations the stats are reduced and eventually the figure will be disabled or killed. Each location is also allocated a damage rating (DR) which is taken into account to determine whether a hit is effective or not.

In addition to the stats the figures may be allocated specific attributes or skills which may improve stats or provide special abilities.

The game only uses a 10 sided dice (d10) which makes is less confusing for new players than Savage Worlds, which we have typically used for this period in the past. The mechanics used are based on stat tests where a player will roll a d10 and add the relevant stat (adjusted by an appropriate modifiers) and if it equals or exceeds 10 then they are successful.

On a game turn initiative is rolled and then players activate figures alternately within each Dodge level. Each figure can then conduct a single action (unless they have a special ability which permits more) which include moving, aiming, shooting and the like. Moving and shooting is permitted if appropriate but with a significant modifier.

Figures also give the player Hero points which may be used to improve dice rolls or allow dice to be re-rolled. This contributes significantly to the Pulp feel as along with the better characters being more robust you can use the hero points to avoid results which would spoil the "feel" of the game.

All the usual combat situations are dealt with along with rules for appropriate period weapons and vehicles.

One of the key features of the system is the approach to the terrain. Rattrap have clearly recognised that most games end up being fought in a relatively small area of the table no matter its size. Consequently their scenarios are based around a 2' x 2' area. Obviously the rules will work with larger tables but the more compact approach certainly speeds up game set up and reduces the costs!

In addition to the terrain the scenarios are expected to include encounter markers which trigger events or allow figures to discover equipment, clues or whatever is required to move the story along.

The rules come with a decent number of character archetypes (which are further expanded in the various supplements) and rules for creating your own. Two sample scenarios are provided along with guidance for making up your own (the supplements go on to build in both of these areas).

Whilst .45 Adventure doesn't have the absolute range of Savage Worlds (particularly in the area of magic for example) it is much more straight forward and provides a really fun experience.

Given the minimal requirements to run a game these rules are recommended. They are available as both a hardcopy ($16) and a .pdf download ($8).
Posted by Whisperin Al at 6:30 pm No comments: 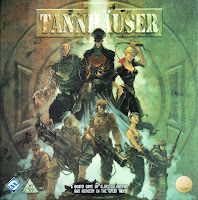 We managed a couple of games of Tannhäuser by Fantasy Flight Games at the weekend. It's a board game with pre painted plastic miniatures set in an alternative 1949 where the Great War never ended. This alternate world looks a lot like some alternative WW2 settings but obviously avoids the swastikas which would preclude the game from being sold in some European countries.

The board is double sided and is laid out with paths marked in different colours. These colours allow the line of sight rules to function amongst other things.

The 10 miniatures are plastic and painted to a decent standard (equivalent to Heroclix). They each come with a character card and a number of tokens which allow you to customise them in terms of equipment, skills and the like. The components are relatively language independent but it didn't take too much effort to work out the meaning of the various icons.

The rulebook is of the usual Fantasy Flight type but still relatively easy to understand and we were up and running pretty quickly. In broad brush terms the game pits the Federated States of the Union (the Allies) against the Reich's forces which is a battle generally between technology and magic. On the face of it some of the characters look very powerful but actually our games were pretty well balanced. Once you've mastered the basic concepts it's a fun game.

I believe more figures and expansions are on the way and this one will get some more outings that's for sure.
Posted by Whisperin Al at 6:17 pm No comments: 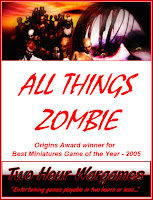 Last weekend Lenin and I played a game of ATZ by Two Hour Wargames. It's another of their rule sets based around the reaction system and with rules to govern the zombie movement and action it works really well solo.

The scenario was based in a ruined world following a catastrophic series of meteor strikes. Lenin had a small squad out searching for survivors and resources. His squad entered the table in two Vietnam era trucks (borrowed from the National Guard) and managed to get about a third of the way in before finding the road blocked by a bus. Failed attempts to start the bus attracted a zombie and from that point things went downhill rapidly. With more and more zombies being attracted by gunfire the squad managed to hold them off for a while but then began to struggle. After losing a couple of the team the others boarded one of the trucks and made a run for it with a huge number of zombies in pursuit. Unfortunately the driver lost control after barging a car out of the way and the truck crashed killing another of the team and injuring the driver. They managed to give the main horde of zombies the slip but ran into another couple on the way to a stronghold they though might hold the local police. Managing to evade them they crossed the bridge to find that the police had succumbed to the zombies and only just managed to get off board.

Lenin thought he'd done pretty poorly having lost half the team, two trucks and not having recovered any resources. On the contrary just managing to get anyone off the table alive in an ATZ game is a win in my book!

See my earlier post for some photos of the game.
Posted by Whisperin Al at 6:01 pm No comments:

If you read WebWitter, my other blog, you may have noticed that I was lucky enough to get a copy of the collected edition of The Red Star. With such powerful imagery and a compelling storyline any wargamer's thoughts turn to gaming it. Given that Lenin originally introduced me to the series we have already done a little investigation into possible sources for figures and the like. I thought I'd pass on some ideas in case you too are interested.

For figures the obvious starting point has to be Copplestone Castings with his excellent 28mm lines including four packs of Neo-Sovs from his Future Wars range along with some Partizans who might be useful for the Nokgorka rebels from Run Makita Run.

Lenin also suggested adapting one or two of the Bolshevik Heroines as Warkasters.

For those less keen on painting the Red Blok forces from Rackham's AT-43 line are also a possibility. This line also includes some walkers which, whilst I can't recall similar ones appearing in the story could easily be fitted in. 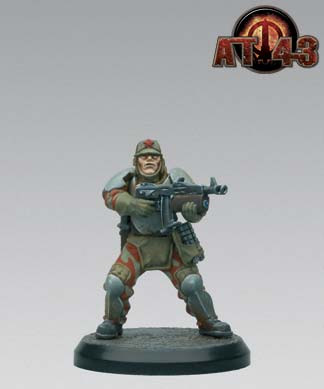 As to vehicles, I doubt that any sane person would look to try to put a skyfurnace on the table (always you had a table big enough) but some of the armour could easily be represented by the Old Crow Sabre heavy tank with a suitable paint job.

I haven't found anything which I would be happy with for Al'istaan as yet but we're still looking...
Posted by Whisperin Al at 8:19 pm No comments:

Pictures from the Gaming Weekend

Email ThisBlogThis!Share to TwitterShare to FacebookShare to Pinterest
Labels: photos

Lenin popped over this weekend and we managed to get quite a few games in. As expected Rattrap had a good showing with games of .45 Adventure and their new offering Fantastic Worlds. We also had a fun All Things Zombie game and a whole slew of boardgames including a first outing from Athens & Sparta. I did take a few pictures but the lighting was a little problematic so plenty weren't up to much. I should post the few that are worth looking at soon along with a little more description of the games.
Posted by Whisperin Al at 8:16 pm No comments:

So scarily enough it's 2008 already (how many of you remember when you were younger thinking the year 2000 was a long way away!) and a chance to make a few changes. I'm hoping to get some gaming in next weekend (.45 Adventure and derivatives is likely to dominate this time) and get some of my lesser played games to the tabletop. I'm sure that, like all New Year resolutions, will fall by the wayside under the relentless pressure of real life! But I'm going to give it a go. Sorting out my figures and terrain would be a useful beginning as would labelling them!

Anyway let me wish you a happy and prosperous New Year!
Posted by Whisperin Al at 10:46 am No comments: