I thought I'd just post a few pictures of what I'm currently working on. They're mostly vehicles I picked up at Salute from Anglian and Force of Arms but I'm also trying to convert a Matchbox Crossley die cast.

Posted by Whisperin Al at 1:30 pm No comments:

As you may have noticed from my earlier post Lenin brought my 28mm late WW2 US figures over last weekend. They are a mixture of Bolt Action Miniatures and Artizan Designs figures the latter from their greatcoats range. The two ranges are both interesting and well sculpted, and they mix very well (as you can see from one of the pictures I have included in the album.

I also included a picture of the Bolt Action German panzer crew which may be useful if I ever get my Panther or Tiger as reinforcements and they fall foul of one of bazookas!
Posted by Whisperin Al at 4:08 pm No comments:

I decided to pick up a couple of Grand Manner resin buildings for use with my Peninsular and SCW figures. Given my limited painting skills I opted to get the painted to a "wargames standard". Here are the results (with a couple of Front Rank figures included for scale):

I reckon they're pretty nice!
Posted by Whisperin Al at 10:22 am No comments:

Lenin paid a visit last weekend and we managed to get quite a few miniatures games in. Here's a brief summary and some photos:

Keen to use the Artizan and Bolt Action figures which Lenin has kindly painted for me, along with my new Terrain Mat I put on a late WW2 game using Two Hour Wargames' Nuts! rules. We hadn't previously used the reinforcement mechanisms and so we were keen to test those out too. This was a recon mission with the US advancing from the woods into the town and the Germans in defensive positions. In the end it was a US victory with the Germans withdrawing but it certainly showed that the rules work well. The terrain was mostly Eslo and Terrascenic.

Next out Lenin put together Warm Acre's Hour of Glory which he had bought as a download. We used my Wargames Foundry German infantry as the defenders and the Warm Acre Rachael Knight figures for Lenin's single raider. In the end it was very close with Lenin conceding that he couldn't get the last bit of intelligence he needed in the last couple of minutes but it had been a tight game.

Clash of Patrols in Belleau Wood

Next up was another Nuts! game, this time late WW1 with USMC and German patrols clashing in Belleau Wood. This was really intended to get my WW1 figures on to the table and to see how Nuts! performs when there aren't any automatic weapons. For some reason in the WW2 game we hadn't paid much attention to casualties and were just taking the "Out of the Fight" figures off the table. In this game we decided to be a little more realistic and make sure we moved those troops back to safety. This gave the game a completely different flavour and the rules worked well even without automatic weapons - so they'll be our rules of choice for this earlier period too.

Lenin put together a "3 Act" game using the Rattrap Productions Gloire rules but applied to medieval Japan. It was a bit of a departure for Lenin as not only did the game not have any firearms (which is pretty unusual) but there weren't any ranged weapons at all! The style of play fitted nicely with the Rattrap approach and again the 2' x 2' playing space makes the games efficient and economical. It did, however, give Lenin a chance to use some JJD walls he had recently painted (very nicely too!). With a little more cosmetic modifications (appropriate sword fighting styles and the like) I think he's on to a winner here.

Two Hour Wargames' rules got another outing with our next game which was a nice mix of both our figures and terrain. Set in the latter part of the 20th Century and following a coup in the Soviet Union the Russians launch a conventional first strike. In this case they dropped paratroops to capture a weapons storage facility in West Germany housing tactical nuclear weapons. Guarding the facility is a section of TA. As might be expected the Rep 3 & 4 TA didn't last terribly long against the Rep 5 & 6 Russian paratroops. Fortunately, help soon arrived in the form of a section of Paras who were a better match for the Russians. Not only was this another good test of the reinforcement rules but it also demonstrated that the reaction based rules work very well when everyone has automatic weapons. It also gave some clear indications as to how varied Reps would perform when pitched against each other - I do have my reservations about Rep 6 though (but maybe that's just me!)

Solomon Kane and the Dark Continent

Our final big game was simply an opportunity for me to use my Solomon Kane figure. In a scenario loosely based on the Moon of Skulls we pitched a lone Kane against a table full of faithful followers of the Vampire Queen in an attempt to rescue the maiden. Using the stats from the Savage World of Solomon Kane our Kane cut through the tribal warriors like a hot knife through butter. In the end the Vampire Queen had to barter the maiden for her own survival and Kane left triumphant - of course the Vampire Queen isn't dead...

Having used Lenin's desert Terrain Mat, I decided it would be a good solution to my snow terrain dilemma. I put an order in via the website for a 5' x 7' snow mat, suitable for 25mm figures, on 24th March. I got a confirmation email and then started to wait.

On 18th April I got my credit card bill and found that I had been charged the full cost of the mat on 24th March (something that wasn't mentioned on the website). As I hadn't heard anything from them since the order confirmation I decided to drop them an email to get a progress update. I got an email back two days later saying "We are completing the end of March orders at the moment so we should be ready to send next week or the following." OK, I thought as these things are made to order, although it would have been nice if I hadn't had to chase them; however, the email also said "Please make sure you are at home when package arrives as you can be charged £12.00 for a further delivery attempt." Now this was quite a surprise, it wasn't something that had been mentioned on the website (I subsequently discovered it's part of the terms the couriers they use applies and he has to use a courier as the Royal Mail won't take the tubes as they're too big!). So I carried on waiting patiently.

On the 1st May I got an email stating that "Items are in manufacture. Once items are in manufacture it is usually 1 week to dispatch." But it wasn't until 15th May that I got an email requesting confirmation of the delivery details. At that stage I gave them a call to confirm the delivery information and the chap on the other end was quite friendly and open about the issues they've had with sending the mats. The delivery is on a guaranteed 3 day arrangement (of course that's 3 working days as the couriers won't deliver at weekends) and so I had to make arrangements for someone to be in or leave instructions as to where they could deliver to avoid the redelivery charge. The mat was eventually delivered on 21st May just three days shy of two months after I ordered it.

Now obviously there's the issue of them charging for something they didn't even start to make until six weeks later but my main gripe is the lack of information. If most of this stuff had been made plain on the website I would have factored it into my expectations. I know this tends to be a cottage industry but when you're spending over £70 including postage I don't think it's unreasonable to be told what to expect. Anyway, enough of the customer service and on to the product. 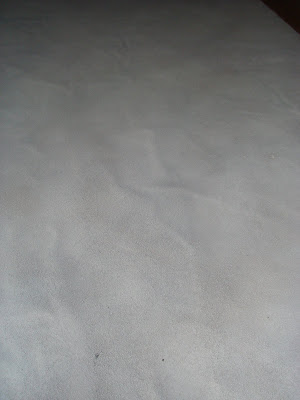 The mat is made from a black fabric base, similar to some of those weed membranes you get for the garden, with a coating applied to it and texture and colour applied to the top. This does mean it is flexible but the coating does come loose in small areas, I had this within minutes of getting mine out of the tube. It doesn't currently distract from the overall effect but does give me some concerns about long term durability. 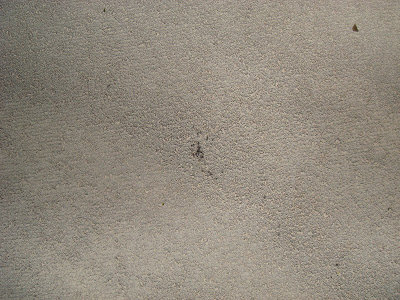 I must say that the mat looks nice on the table and, with the appropriate items put under it, provides the undulating look I was hoping for. Here are a couple of photos with some Artizan late war Germans (painted by Lenin) and a Corgi die cast Panther from their skirmish range: 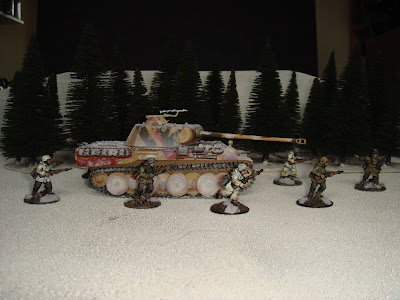 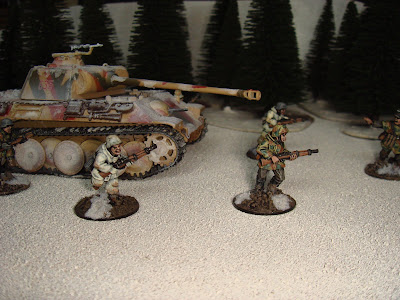 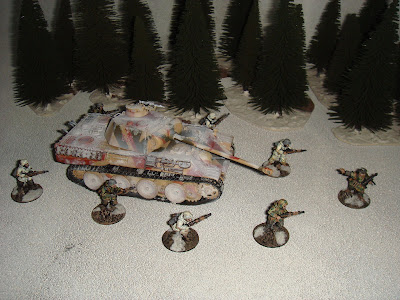 I will be using the mat in anger next weekend for a gaming session and it will be seeing a few more outings as I start to progress my Winter War project so I'll post more photos and updates on how it performs over time.
Posted by Whisperin Al at 7:48 am 1 comment: