Sharp Practice are a set of Napoleonic skirmish rules from the TooFatLardies. We've only given them a single outing so this isn't intended to be a review but rather a few initial thoughts.

The strapline for Sharp Practice "Wargames Rules for large skirmishes in the Black Powder era" starts to give you an indication as to whom these rules are aimed. The nearly 70 page booklet is a combination of rules and background information which is obviously heavily influenced by the Napoleonic period and in particular Bernard Cornwell's eponimous hero from the Sharpe series of books. The rules themselves are geared around individually based figures but not in the 1 figure=1 man sense as with TW&T or IABSM. Rather they are intended to be more representative to enable variable sized games to be played.

The origins of several of the rule mechanics can easily be seen if you are familiar with any of the other rules from the Lardies' stable. The card based activation system is present along with Big Men from IABSM along with additional initiative cards similar to those found in TW&T and the combat system bears more than a superficial resemblence to Triumph of the Will. Notwithstanding the clear Lardies heritage these are not a simple repackaging; quite some thought has gone into the "feel" of the game and the combination of formations and background information on tactics and manouvers means these are a decent enough read.

Our first game suffered from the usual hiccups relating to learning a new rule set and we had, perhaps, less figures than might have been idea to test out its full scope; but we came away thinking that these are worth persevering with (something a lot of rules have failed to do after the first game).

Once we've given them another couple of outings I will feel confident to post a full review.
Posted by Whisperin Al at 8:31 pm No comments:

Last weekend Lenin popped over for one of his regular quarterly visits and we managed to get a few games in. 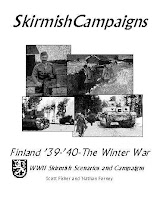 We tried out one of the smaller scenarios in the SkirmishCampaigns Winter War booklet using a mixture of 28mm Brigade, Bolt Action and Baker Company Finns and Lenin's Copplestone RCW figures standing in for the Soviets (my Bolt Action ones should be ready soon).

The variable attachments meant that the Soviets added an additional squad to their base two and the Finns gained an HMG and assault squad.

The scenario also gave me an excuse to paint up one of my Bolt Action Eastern Front houses and an Anglian T26 (which, unfortunately, didn't hit the table as it was one of the other variable attachments).

The first challenge was to convert the SkirmishCampaigns statistics to Nuts! which are our preferred skirmish rules. The approach we adopted was a straightforward conversion using the full Rep range from 2 to 6 with exceptional leaders getting additional attributes. With this particular scenario that meant the Soviets were all Rep 2 including the officers (other than the Commissar - which Lenin wasn't lucky enough to get as a variable attachment). Whilst the result was probably not unrealistic it did make the game a little one sided as the Finn's Reps were significantly higher.

Nevertheless the game was fun as the Soviets were dug in around the church but it did make us want to rethink the conversion system.

Next up was a 15mm game using one of the TooFatLardies new supplements for their Troops Weapons & Tactics rules - Rock the Casbah. We'd previously tried TW&T and, whilst we like I Ain't Been Shot, Mum (from which they're derived), we thought TW&T added complexity but without adding extra enjoyment. Consequently, Lenin adapted one of the scenarios for FNG.

The Israeli column was exceptionally lucky as, despite being ambushed several times, none of the RPGs fired at the vehicles actually hit. Had they done so then, under FNG, the occupants would most probably have been Out of the Fight.

Given that the period is a favourite of Lenin's (he owns it in a large variety of scales) I think this will be one which will be hitting the table again.

Modern - Blackboots on the Beat

We followed up with another 15mm game using a new Lardies supplement, this time B'Maso. This time Lenin decided to stick with the Lardies rules and used I Ain't Been Shot, Mum. Using Peter Pig figures and vehicles, the scenario featured the British South Africa Police investigating a suspicious incident at Mr Patel's Wondermart.

Of course the BSAP were ambushed and (mainly owing to initially playing the straight IABSM rules rather than the B'Maso variant - Doh!) they took rather substantial casualties. Having concentrated the whole force to see off a few insurgents the BSAP lost one of the vehicles to a landmine and spent the rest of the game chasing the oppostion across the board.

It was a fun game that warrants more plays (especially using the right rules!) 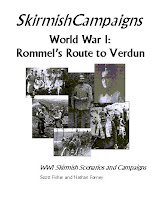 Back to 28mm for our fifth game and the second to use a SkirmishCampaigns booklet, this time Rommel's Route to Verdun. I plan to play all the scenarios in this booklet in sequence over coming weekends as they're all just the right size for a good Nuts! game.

This scenario game me a chance to get our my new early war Germans and French from Renegade. In this case only two small sections of Germans against a single larger one of French. We used the same conversion approach was with our earlier Winter War game and, whilst the Reps weren't quite as extreme, it did reinforce our view that we need to revisit the conversion.

As the Reps were a little closer, the game wasn't quite such a walkover. Although the Germans did get the variable attachment which meant that both their officers were Rep 6! Of course the other issue is converting turns to Nuts! - we settled on using activations and counting only the successful ones for both sides with the limit being that both had to have the requiste amount.

Next up was a Napoleonic skirmish during the Peninsular campaign in 28mm. I'd just picked up a copy of the Lardies latest new rules, Sharp Practice and also wanted to give my new Grand Manner buildings an outing.

The scenario was a bit spur of the moment and the Big Men were rolled randomly from the rules. Basically an advance party of the 95th Rifles under Lieutenant Blunte had secured the little village of San Guano (after which the infamous Banana Republic was named) and had to hold it against all comers until relieved.

In the end Blunte didn't live up to his normal reputation and actually saw off the French!

Whilst we weren't using all the optional rules (e.g. no bonus deck) it did give us a decent initial view of the rules (I'll probably post a more fuller description of my first thoughts later) and left us thinking that we should try them again with more figures.

Aegypt - Temple of the Skull 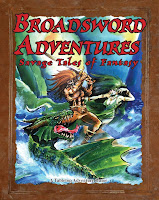 Our final game was another 28mm one but quite, quite different from the others. Lenin put on an excellent Aegyptian game using the new fantasy rules from Rattrap - Broadsword Adventures. As with the other Rattrap rules these are designed to work on small tables (2 x 2') with only a few figures and loads of terrain.

I suspect it was also an excuse to use his catgirls! The game played very well despite the lack of ranged weapons (quite a departure from the usual Rattrap scenarios) and the scenery looked great.

I suspect we will be using the Broadsword Adventures rules again in the future in preference to our usual Savage Worlds.

I've posted a few photos of all the games in a Picasa album:

Posted by Whisperin Al at 8:53 am No comments: