Clash of the Titans: First Impressions 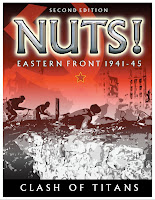 Two Hour Wargames recently released their Eastern Front supplement for Nuts! entitled Clash of the Titans. Given my growing interest in winter warfare and the eastern front I decided to pick up a copy.

Clash of the Titans (CotT) comes in at 98 pages and so, since I bought the PDF download, it came as two separate 8.2MB files. The supplement is intended to cover warfare on the eastern front from 1941 to 1945; however, elements can also be used for the earlier Winter War too (another reason I picked this up!)

CotT starts with a short introduction and then moves swiftly into 9 pages of background on the eastern front broken down into the various major periods and campaigns of the theatre. Whilst obviously not in a great level of detail this background provides a pretty good overview and enough context for the supplement as a whole.

The next section provides lists for the various armies involved which, whilst covering some of those detailed in the main rules, provides plenty of additional forces. It includes Soviet, German, Italian, Hungarian, Romanian and Finnish army lists.

There are also additional units covered including airborne (sic), assault troops & stosstruppen, cavalry, engineers, militia, naval infantry, NKVD, penal units and also rule modifications covering women in combat. Each has a short section and some have special equipment, attributes or tests in addition to being included in the army lists - which are laid out pretty much as in the main rules.

Next is a new character attribute "Ruthless" which has been specifically included for Komissars. This is followed by new morale advantages "Plucky" and "Fanatic". Following this there are rules for new Soviet equipment specifically dealing with the SN-42 assault vest and the anti-tank dog teams.

Having covered the infantry combatants CotT then turns its attention to the vehicles. This section covers all the main vehicles and guns used in the theatre by each of the same armies as are covered in the infantry section, but also some of the more specialised ones including multi-turret tanks, aerosans and tchanka. The lists are, again, laid out pretty much as per the main rules and are pretty comprehensive and, I found, rather useful for earlier period equipment than Nuts! itself. The following section covers rules for boats including types, movement, combat and swimming. It also includes some sample generic boat stats.

Next up are some reinforcement tables for each army which replace those which appear in the main rules. Vehicle availability for each country is split into the various main periods. This is followed by special rules for cavalry, ski troops, bicycles, airborne landings and then the effects of the weather & environment. The latter covers the obvious snow and freezing conditions but then goes on to address privation and out of supply effects.

There are then several pages devoted to terrain including rachels (sudden folds or gullies), barbed wire, building damage, rubble and ruins, sewers and fortified structures. Perhaps unsurprisingly this is followed by a section covering campaigns in urban combat areas which contains all the mechanics and supplementary rules for setting such campaigns, support levels, missions, encounters and the resupply and replacements.

Finally there are six scenarios each covering a different type of eastern front warfare; however, it should be noted that some of these are rather large encounters with one requiring around 20 vehicles (so probably not for 28mm on a 6x4 table!). I have to say that, whilst interesting, the scale of some of the scenarios and specific nature of some of the forces meant that these were the least interesting part of the supplement for me, although it did inspire some ideas!

I have certainly found plenty of useful information in Clash of the Titans and, given the effort clearly put in, I thought it was worth the $17 price for the PDF (a hardcopy is $20) but obviously your mileage may vary.
Posted by Whisperin Al at 7:53 am 2 comments:

Here are a quick couple of photos after the main drybrushing: