I spotted that the Too Fat Lardies have managed to reprint the von Reisswitz Prussian Army Wargame Kriegsspiel so I ordered a .pdf copy of it. The book is the 1824 version of the rules with both Editor's notes and the 1828 update included. The .pdf isn't terribly printer friendly as over the first half of the book has coloured backgrounds to the pages.

The Lardies also produce scenarios and a version of the Meckel map to go with the rules and I believe Lancashire Games make the markers - so this could be yet another project (which will never get finished!).
Posted by Whisperin Al at 4:22 pm 2 comments:

The Savage World of Solomon Kane 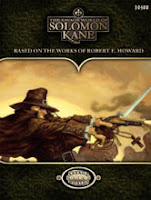 I really enjoyed Robert E. Howard's The Savage Tales of Solomon Kane and this book allows you to bring it to both the RPG and tabletop world with the Savage Worlds rules.

Of course now I need a figure for Kane himself...
Posted by Whisperin Al at 4:15 pm 2 comments:

I managed to pick up a copy of the Columbia Games block wargame Quebec 1759 on eBay recently. It was actually an old Gamma II edition but other than a couple of very minor production differences the games are identical. The box sleeve was a little more badly damaged than I was expecting but the game was complete and the block bags still sealed and unstickered - though after C&C:A I would have been happy to get one with the stickers already fixed. I've only had a chance to read though the rules so far and it's pretty much as expected. It was one of Gamma II/Columbia's early games (first published in 1972) and so is somewhat less sophisticated than their later offerings but that's what I was looking for - I want a range of games I can play with different sets of people. My other half likes board and card games but isn't keen on wargames as they're "too thinky". I'm hoping something simpler like Quebec 1759 might allow a foot in the door. Who knows - but it's got to be worth a try!
Posted by Whisperin Al at 8:47 am No comments:

Managed to get quite a few games in when Lenin visited last weekend including Troops, Weapons and Tactics, Metal Storm, Renaissance Raiders, Savage Worlds and Commands and Colors: Ancients Expansion #1.

Troops, Weapons and Tactics is heavily based on the Too Fat Lardies previous rules I Ain't Been Shot, Mum! (IABSM) and that is very apparent. As the rules are lower level, with the tactical unit being a fire team rather than the IABSM section, a few additional mechanics have been added. This was only the first try out but our initial impression was that, whilst they did provide an interesting game, the additional chrome didn't produce a result which was a pleasing as Nuts! in terms of the "feel". Obviously this is highly subjective but I think the additional mechanics confuse and complicate the basic IABSM approach but don't deliver proportional added value - which is a shame as I am a big fan of IABSM and use them as my preferred rules for the next level up.

Metal Storm was another first outing. The rules appear to be heavily based on Peter Pig's AK47 Republic rules with the addition of different dice sizes and rules for more modern weaponry. As with all rules which use up and downgrading using different dice sizes (d4, d6, d8, d10 etc.) the statistics are a little iffy but the overall result was a fun game (though we're reserving judgement on the realism element) and I expect these will see another outing (though possibly with some tweaks).

For oue first go at Renaissance Raiders from the Antwerp Fusiliers, we pulled out my 28mm Vendel Border Reivers, Grand Manner Bastle House and Gripping Beast livestock for a little sheep and cattle rustling on the borders. The rules are heavily influenced by the Commands and Colors system and are intended to be hex based. Since I don't have any hex terrain I chose to restructure them slightly to allow them to be used on a normal tabletop. Again they gave a fun game but in my view the card and average dice initiative mechanic was a little too involved for the type of game we were trying and the cards needed to pop up more often (and be a little more varied) to add flavour. The core approach is sound but a few changes are what's needed for it to become ideal for a Reivers game rather than a more traditional Renaissance battle.

Savage Worlds once again proved it is a versatile ruleset allowing you to meld various genres successfully. Lenin presented an excellent Pulp meets Call of Cthulhu game which was tremendous fun.

And having spent ages putting the stickers on my Greek and Eastern Kingdom expansion for Commands and Colors: Ancients (CC:A), I was determined to actually use it - so we set up and played the Gaugamela scenario. CC:A is still a favourite and the card system provides some real challenges for each commander.
Posted by Whisperin Al at 8:44 am No comments: