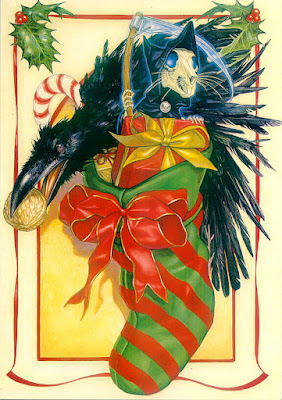 My compliments of the season to you all!  Thank you for stopping by, apologies for my absence of late and here's hoping you get some gaming goodness under the Christmas tree!

Crowdfunding - Why do it?

Further my previous introductory post on Kickstarter, I thought it was worth setting out why you might consider crowdfunding a project given the financial risk and potential disappointment you could be exposed to.

(1) Without you it might not ever happen - although this is an ever reducing proportion of the projects being launched in the gaming space, there are still some less mainstream topics which would probably not be produced without both the finance and the secured level of interest crowdfunding provides.  Traditional wargame figure manufacture and boardgame production is an expensive exercise to commission and often involves minimum runs in order to cover its production costs.

(2) It may never come to retail - some projects simply don't make commercial sense and so funding a production run via crowdfunding may be the only way to make it happen.  Some other projects are simply so expensive to produce that with retail markups (especially for boardgames) would simply result in a retail price that was eye watering and unlikely to sell.  But beware of FOMO (the fear of missing out) - just because something isn't going to come to retail doesn't mean it will be a great product indeed it might indicate the opposite. You need to take a cold hard look and make sure it's worth the money and you are not just backing because you might miss out!

(3) You might save some money - crowdfunding projects often offer products at a lower price that you may pay eventually at retail; however, you do need to factor in shipping costs (which are usually only estimated initially) and any VAT or customs duties you may be hit with later.  These days with the increasing costs of shipping and changes in VAT requirements etc. this has become an ever decreasing reason for backing.

(4) You might get it earlier - backers can receive their products before they reach retail but this is not always the case.  Check what commitments, if any, the project is making before relying on this to be the case.

(5) Exclusive extras - crowdfunded projects often include stretch goals should the funding levels reach particular milestones, they also may include "early bird" offers to help boost initial pledges.  Whilst both of these may help add value in the case of (3) above they are not necessarily "exclusive" to backers (ie you may be able to buy them later in retail for an additional cost).  Where items are stated to be "exclusive" it is usually necessary to read the wording very carefully to see whether it provides more flexibility for resale later than first appears.  In any event, the key question is what do these exclusive items add to the product - in particular with boardgames - are they worth it (ie if they were necessary why aren't they in the core offering - why make them "exclusive").

(6) Being part of a community - with some crowdfunding campaigns a community builds up of the backers (with some platforms restricting comments etc to backers only) and this can be fun but your mileage may vary (and like any community on the internet things are not always ideal with people's behaviours.  You may also get the chance to influence some aspect of the product (although the more you can influence the less mature it is likely to be and thus more risky!)

Have I missed any?

In any case, it should be apparent now that few of these are entirely compelling reasons and you need balance these with the risks (ie that you end up getting nothing!).

And last, but not least, for the Imperial forces - some command stands: 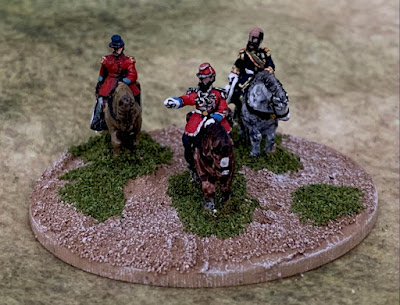 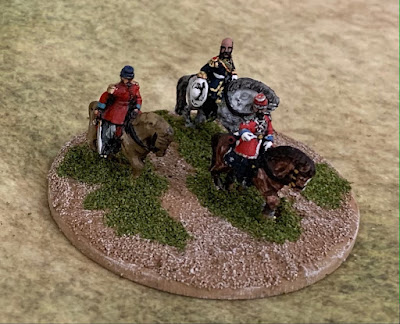 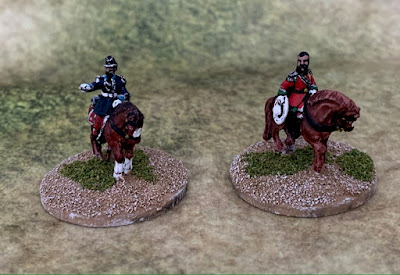 The figures are from the Freikorps range (available from QRF, painted by Roger and based by me.

Some limbered artillery for my Imperial forces (I have rather a lot more unlimbered batteries but thought these were more interesting!)

The figures are from the Freikorps range (available from QRF), painted by Roger and based by me.
Posted by Whisperin Al at 5:30 pm No comments:

Some more mounted troops in the form of the lovely Empress Lancers: 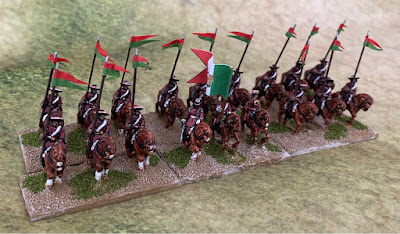 The figures are from the Freikorps range (available from QRF), painted by Roger, based by me and with their flag from Warflag.

Posted by Whisperin Al at 5:30 pm No comments:

Some more mounted support for the Imperial forces: 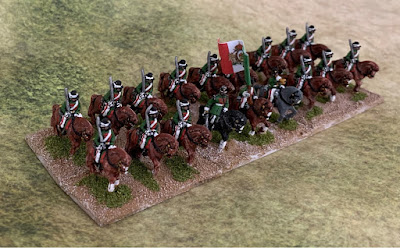 The figures are from the Freikorps range (available from QRF), painted by Roger, based by me and with their flag from Warflag.

And now some mounted Contra-Guerillas: 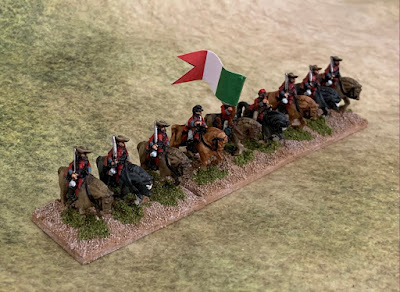 The figures are from the Freikorps range (available from QRF), based by me and with a flag from Warflag.

Posted by Whisperin Al at 5:30 pm No comments: