I picked up a copy of Great Escape Games' new WW2 rules Iron Cross a number of months ago.  I knew they were fast play and so I was hoping I might be able to use them for larger games than some of my current favourite rules allowed.  I did have a few reservations after a read through and also when I heard that they often play the game using 28mm but, as so often happens, a game is quite different on the tabletop than a simple read through would indicate.

So when Lenin came over for our annual pilgrimage to Salute (I did warn you I had a backlog of posts!), I put together a game using my 15mm WW2 figures.  As usual I took the role of the dastardly Hun and Lenin was the plucky Brits trying to stop me from advancing on Dunkirk.

This was a simple attack and defence scenario with the Germans having to push through a village. 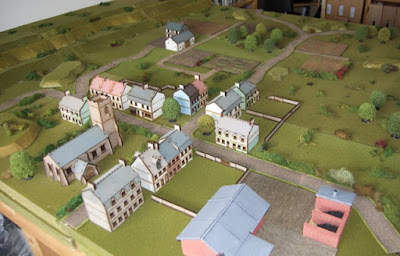 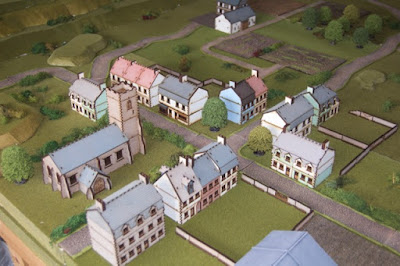 I had a company of troops with tank support to assault the village and I started with a bold advance down the table: 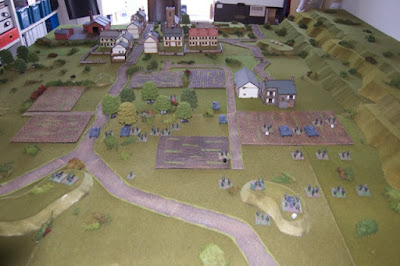 It was quite clear early on that, whilst simple, the mechanics started to bog down a little with a large amount of troops on the table. I assume that this may well reduce with frequent play but it did all present as being a little fiddly.

Things soon got messy when the Brits decided to open up with one of my Panzers being brewed up on the road. 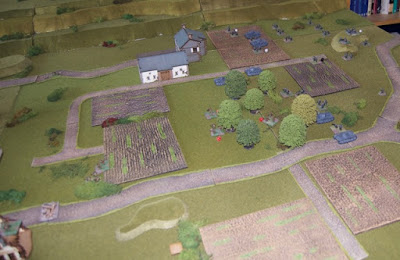 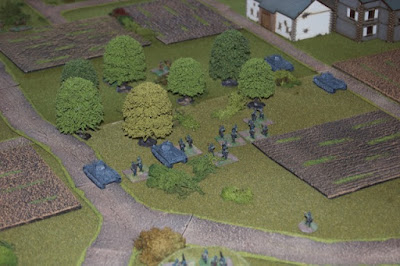 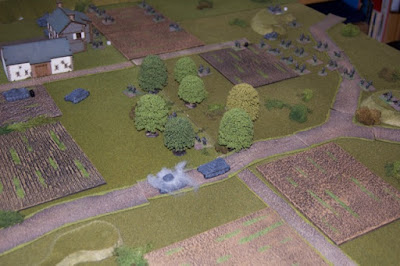 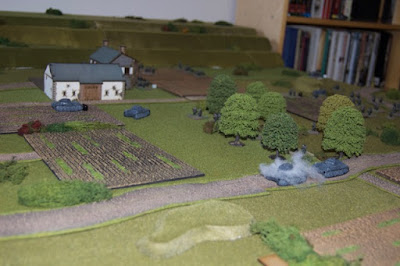 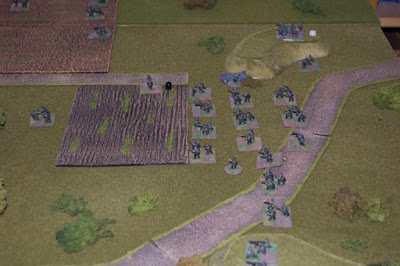 I managed to push the Brits' advanced positions back but those dug in in the village were a bit more difficult to winkle out. In the end I did enough damage to make them withdraw but they had done enough to me to delay our overall advance.

As to the rules, I may have mentioned this in a previous post but I think games fall on a spectrum running between pure game at one end and simulation at the other. Recognising that no game is a real simulation of warfare unless the other side can actually kill you! I have games which fall right across the spectrum and enjoy them but when it comes to historical tabletop gaming I want something that's in the simulation half. In this case the simple approach to the tokens as the only command and control mechanism really meant these rules aren't a good fit for me for this size of game and, for lower level games, I have rules which play almost as fast and are much richer experiences.

I'm not saying these are bad rules and I do think there is a place for this type of game but they're not the rules I'm looking for...

I know it has been an age since my last post and I have quite a backlog of items to post but when they say "old habits die hard" I'm not sure what they mean...  I've found getting back into the old habit of actually blogging regularly has been pretty hard!  I suspect part of it is the desktop being a bit less easily accessible and my experimentation with blogging from an iPad less than successful.  But I now have a new option and so I'm going to see if that can get me back into posting regularly (no promises though!)

In any case, back to the original purpose of this post.  Last weekend I met up with some old friends and we sat down to a decent sized pike and shot game using the Tercios rules.  The game was Nieuport 1600 with the Anglo Dutch facing off against the Spanish with both sides having a liberal sprinkling of mercenaries.

I managed to bag the English and Frisian troops under Sir Richard Vere on our left flank.  I was a little cautious given I didn't know the rules but got the hang of them pretty quickly.  My left flank was anchored by the sea and my wing was pike & shot with a battery of artillery with my right flank supporting the Dutch centre. 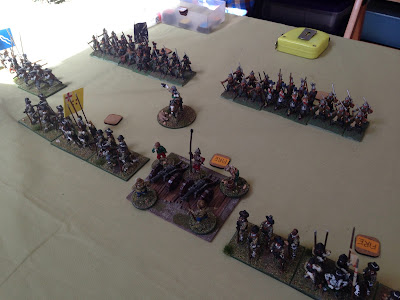 Opposite me was a mixed group of cavalry and infantry. We were deployed with an estuary at our backs and so retreat was simply not an option - something the Spanish decided to use against us with an aggressive advance. 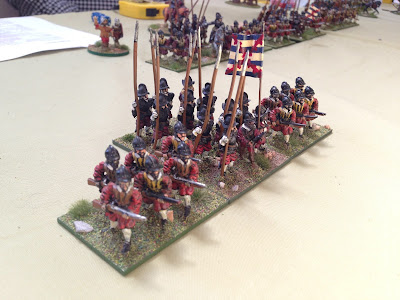 My artillery followed by my musketeers, as the range closed, managed to cause some serious damage to their advancing cavalry.  But their second rank of cavalry overran my guns but we repulsed by my second line.  Then followed their infantry but with some spectacularly poor luck with the dice I had soon put paid to them and their entire flank collapsed!

Unfortunately our centre was hard pressed and the main cavalry battle on the right wing was as usual a exercise of them chasing each other around the table.

I turned my troops and began to threaten the Spanish centre's now exposed flank.  Their Tercios were pretty hard but had taken some hits from our centre before it crumbled and so with a concerted assault and a heroic charge by Sir Richard combined with our cavalry coming back after seeing their's off, we managed to take the day.

All in all it was a fun game and great to catch up with the old crowd.  Just a shame that I don't really have any thirty years war figures - although I'm sure the rules could be used for other similar things.  Of course it has got me interested in planning our a game with my Tudor Irish...
Posted by Whisperin Al at 9:34 pm 7 comments: