Work has been manic which combined with coming down with a nasty cold (possibly not entirely unconnected with the former) has meant not much time to make progress on the various projects.  As it is I am slowly progressing the basing on my Montrose horse and commanders but it will be a week or so before I can start posting pictures of those.  In the mean time my Muskets and Tomahawks figures have reappeared and are sitting alongside the Montrose and early WW2 Polish troops on the workbench - so expect updates on those some time around the Montrose ones.  Once I've cleared that lot it will be onto the next phase of French foot for my WSS project.  I'm also hoping to fit in the construction of a few more 4Ground buildings.  That's cramming a lot in given that work isn't likely to calm down for another couple of weeks - so I'm expecting some slippage of this new programme (you've been warned).

Whilst I'm trying to progress all of that I've decided to try a little experiment - I'm going to create separate specific blogs for my current major projects.  Don't panic that doesn't mean I won't be posting about them here!  What these specific sites are intended to do is capture all my material relating to the project and is likely to go into somewhat more detail than I typically do here.  These will take some time to put together with enough material to make them worth a visit - so watch this space.

Apologies for the lack of posts last week.  What between work being manic and preparing for the club open day on Saturday I haven't really had chance to do much else!

In any case I put together a 28mm WW2 game based around the 9th Battalion, 6th Airborne Division on Thursday, 8th June 1944 (two days after D-Day for the uninitiated) and their engagement around the Château St. Côme.  Things didn't go quite historically with the 857th Fortress Infantry Regiment turning out to be a little more formidable that expected (thanks to some legendary dice rolling) but, in the end the Paras managed to fight off a German counter attack and secure the Château.

Here are a few photos from my game:


and some photos of some of the other games on the day: 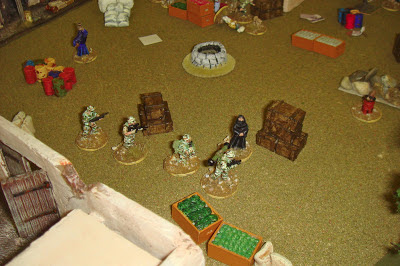 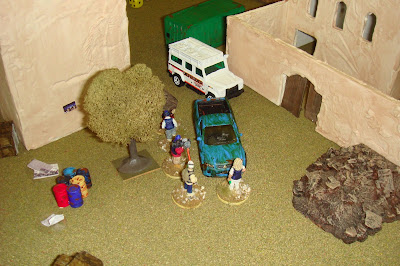 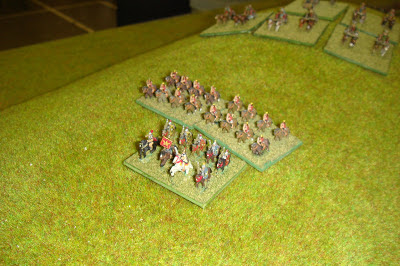 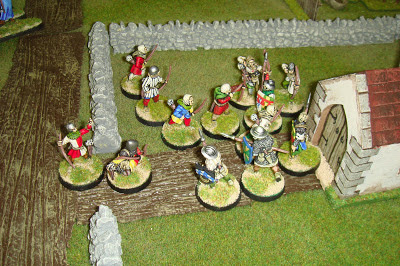 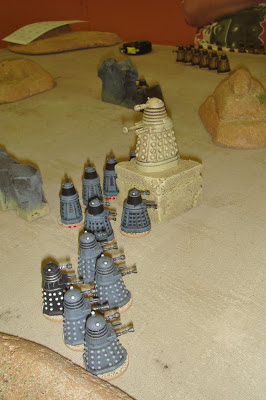 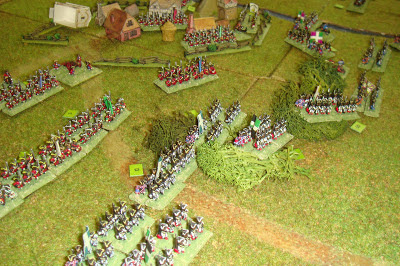 I followed up my last little 4Ground assembly with a slightly bigger one.  This time it was the second single storey side street building: 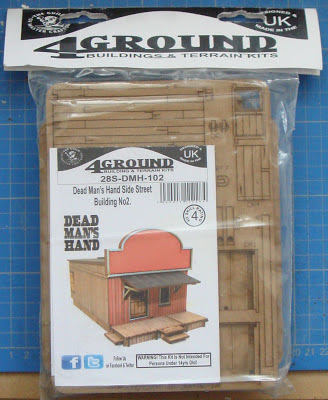 Assembly was a fraction more complicated than the previous one as this one has a working roof hatch.

Here are a few pictures of the finished building: 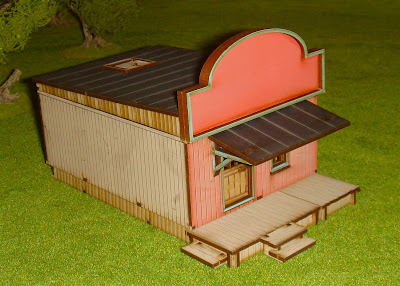 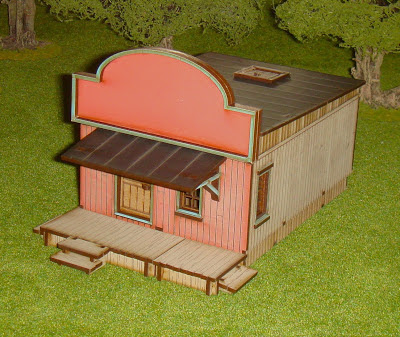 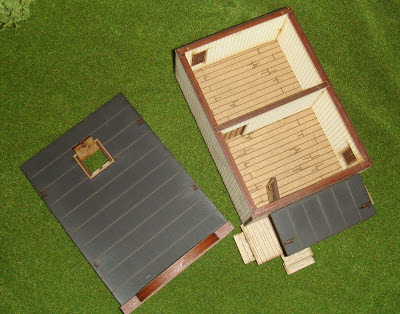 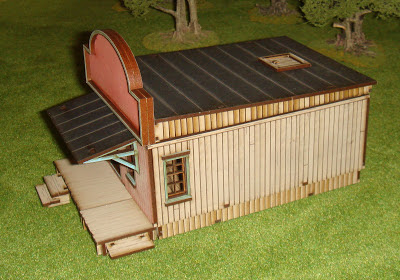 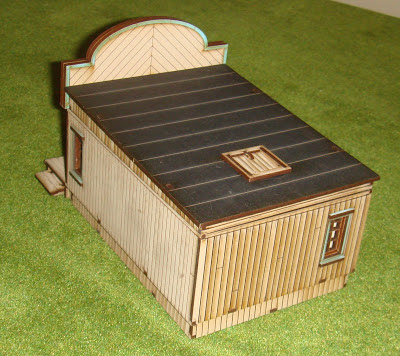 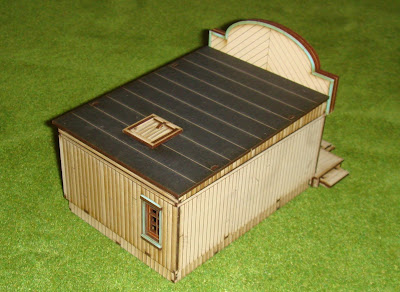 And here it is with the first building, the wagon and the outhouse: 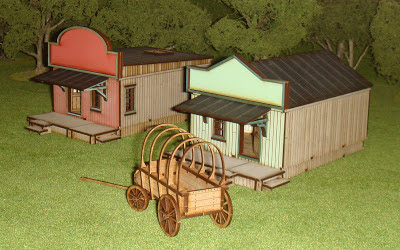 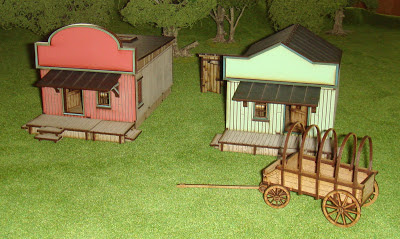 I assembled another of my Broadside purchases this morning.  This time it was the 4Ground pre-painted 15mm Timber Framed Cottage from their Renaissance & ECW range. I bought the kit as an experiment as I am thinking of using it for my WSS games and also for additional terrain for Operation Sealion games to make the other buildings a little more like Blighty.

As with the other 4Ground buildings it was very easy to put together.  Here are some photos: 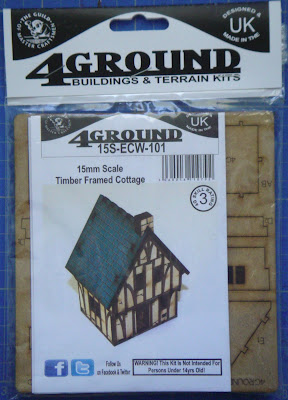 As you can see it is somewhat smaller than the Europe at War series but that's exactly what I wanted for WSS and the kit is only £8.
Posted by Whisperin Al at 10:10 am 8 comments: 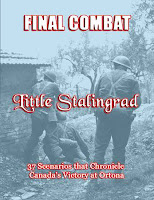 The next my occasional series on scenario books from Britton Publishers is their latest offering - Little Stalingrad.  This book contains 37 scenarios based around the Canadians at the Battle of Ortona, Italy in 1943.

The booklet comes in at 116 pages and the pdf is just over £9.  As with some of the other books this one has some very brief publisher's notes and a table to help you translate the stats from Final Combat to Arc of Fire, Battleground, Disposable Heroes, Face of Battle and Nuts!  This is followed by around 9 pages of historical material on the battle and the opposing forces which provides the background for the scenarios.

The scenarios are broken down into 10 separate sections and, in my view fall into three broad categories - firstly there are tiny scenarios, often only in a single building with a couple of troops, then there are the moderate sized infantry scenarios and finally there are the large scenarios which require multiple Shermans etc.  (roughly 7/20/10).  Each scenario starts with a brief introduction, the specific setting, an order of battle for each side, the victory conditions and the historical aftermath. The final section of the book has the maps for each scenario - this time they have been created using some software called Campaign Cartographer and are functional and each is accompanied by some brief GM notes.  Since the scenarios cover the urban fighting most of them require buildings of varying sizes, some ruined.

This is a battle I knew little about and so have found reading the booklet rather interesting and the variety of sizes of scenario means that if you have some buildings suitable for Italy and some suitable figures (both of which I have access to) there should be something here for you.
Posted by Whisperin Al at 5:46 pm No comments:

One of my purchases at Broadside was the 28mm 4Ground Wooden Closet (although given it hasn't any plumbing in evidence I suspect it's not that sophisticated!).  I put it together last night so I thought I'd post a couple of pictures: 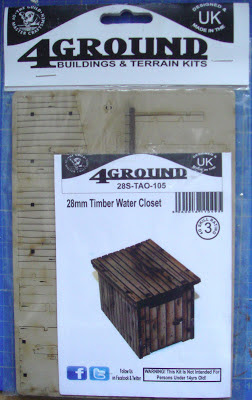 As with their General Purpose Wagon it comes on a single sheet of MDF but, in this case, it is pre-finished.  You can assemble it complete or remove some sections to make it look in need of some repair. 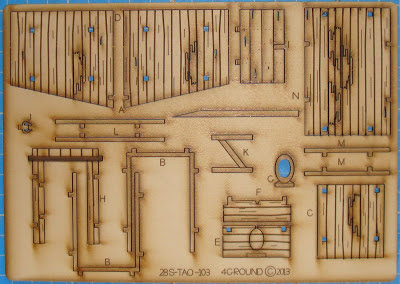 It was very easy to assemble and here's the finished article 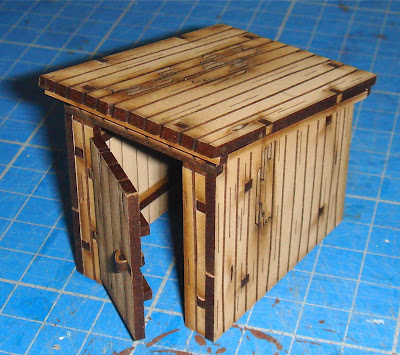 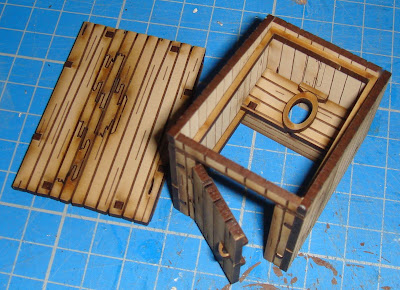 And here it is occupied by a Brigade Games figure: 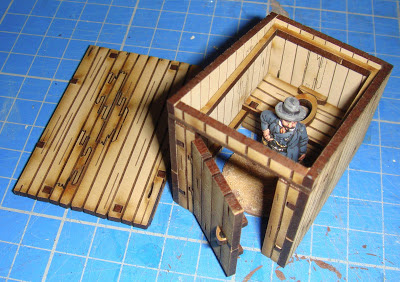 So here's a quick picture of the stuff I brought back from the Broadside show at the weekend: 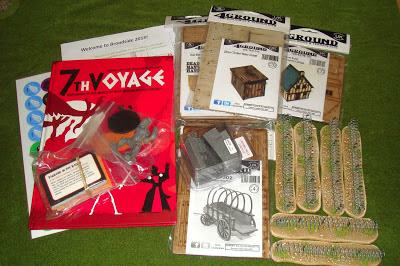 As you can see I succumbed to more 4Ground stuff along with 7th Voyage from Crooked Dice and some barbed wire bits from Tablescape.  I also picked up a set of custom loads for my 4Ground carts from Colonel Bill's (as suggested by The Angry Lurker - thanks for the tip mate!).

When I'd taken the picture I suddenly realised I hadn't added the pack of 28mm WW1 Belgian civilians/refugees I got from Brigade Models ostensibly to go with some of their WW1 Belgian troops I already have but they're likely to show up elsewhere and elsewhen too!
Posted by Whisperin Al at 5:08 pm 10 comments: 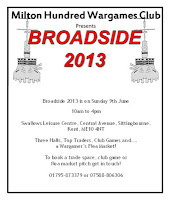 On Sunday I managed to get over to the Milton Hundred Wargames Club show - Broadside 2013 - in Sittingbourne.  I like to get along to support the show, as it's local, but also because it's a great little show.  They manage to attract a decent range of traders (including Warlord Games and Wargames Foundry amongst others) and have a good selection of games.

I arrived about 20 minutes after the show had opened and had a wander around to locate the traders I wanted to throw money at.  Unfortunately one of them had obviously had a change of plan and wasn't there which was a bit of a downer but the others certainly made up for it.  I'll be taking a picture of the loot I did secure separately.

Here are a few photos of some of the games:


I also managed to play the Maidstone Wargames Society's Those Magnificent Men in their Floating Machines participation game: 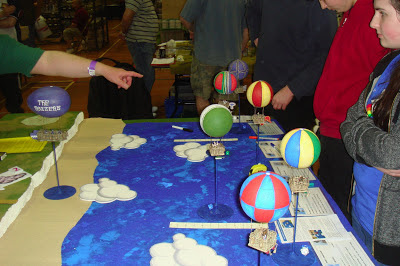 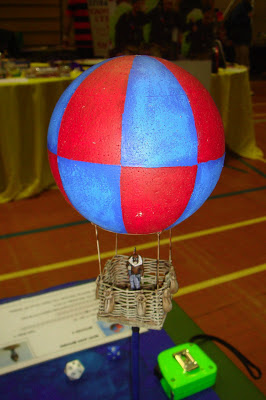 It was a good day to meet up with people too.  Apart from chatting with the Maidstone chaps I had a good old natter with those splendid chaps Ray (Don't throw a 1), Lee (Big Lee's Miniature Adventures) and Fran (The Angry Lurker) at the Rejects' Battle of the Boyne game.  And I was lucky enough to be on hand when Ray was presented with a fantastic gift by Tamsin (Wargaming Girl): 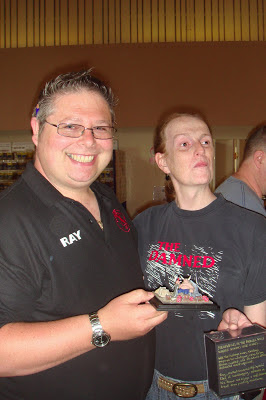 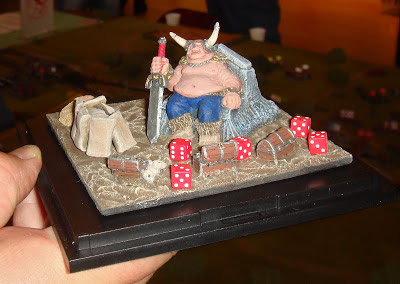 (You'll need to read her post to get the background)  I have no idea how many sittings it must have taken to get such a great likeness (Note to self: Remember to duck the next time I see Ray!).

I also actually got to meet John Lambshead (John's Toy Soldiers) and have a brief chat and John introduced me to John Treadaway (photo courtesy of John):

And I had a chance to chat with Henry Hyde about his new book and managed to see an early copy - blimey is it a weighty tome!  So all round a good day.
Posted by Whisperin Al at 6:48 am 6 comments: