With my figures progressing, albeit slowly, I now need to decide which set of rules I'm going to use for my Montrose project.  At the moment I have three candidates, two of which I have played:

The first is For God, King and Country by Bruce McFarlane published by the Canadian Wargamers Group.

As with the other CWG books, this is a guide to the period with a set of rules and scenarios.  The mechanisms seem to be a mash up of the melee rules from Flower of Chivalry (their medieval rules) and the musketry from Habitants & Highlanders (their French Indian rules) with a few specific rules added.

Of course it, like their other rules, does suffer from some rather poor proofreading (as you can see from the cover!)  But as the book contains scenarios for Montrose (Tippermuir and Aberdeen) it's a pretty good place to start as it requires the least work anyway.

Next up is Pike & Shotte by Steve Morgan published by Warlord Games.  I've played these once before - using my Tudor Ireland figures - and quite enjoyed them.  Obviously they're a derivation of Black Powder but with enough changes to make them period specific (or annoying if you're too familiar with BP I suspect).

Unfortunately Pike & Shotte doesn't have any pre-prepared scenarios like For God, King & Country but it does have army lists for Montrose and the Covenanters which is a good start. 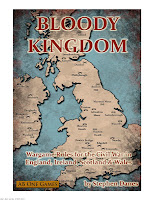 The third alternative I have is Bloody Kingdom by Stephen Danes published by AB One Games.  I believe this uses some of the same mecahnisms as his Thirty Years War rules Father Tilly but with some specific Civil War elements added.  Since I haven't yet played either set I can't yet voice an opinion but they look interesting based on a quick read through.

As with Pike & Shotte, Bloody Kingdom doesn't have any pre made scenarios for Montrose; however, it does have sample army lists for Scots Royalists and Covenanters.

I'll be trying each of these out in turn once I have enough figures based and will then report back.  But in the meantime if you've played any of them I'd be interested in your opinion!

For God, King and Country is available from Caliver Books for £17.50 in softback or from Sabers Edge as a PDF for US$9.00.  Pike & Shotte can be sourced from Warlord Games for £30 or you can save yourself some money (as I did) and get it from Amazon