Having, almost literally, stumbled over the box containing my 15mm ACW figures I thought it was high time I got them back on the table.  So I put together a small game for the club based on the Battle of Sabine Crossroads (or Mansfield if you prefer) from April 8th 1864.

I had to make a few slight adjustments to the Union order of battle to deal with the fact I don't actually have any Union cavalry - so the lead cavalry division suddenly became infantry but otherwise I tried to stick to a good representation of the forces using the original Fire and Fury rules.  I had the Union deploy historically but allowed the Rebels a freer hand.

The Union forces under Major General Nathaniel P. Banks had been advancing up the Red River. They split their joint Army and Navy force and marched towards Mansfield up a single track through the woods. Recognising the enemy’s weakened position, the Confederates under Lieutenant General Richard Taylor had selected the Sabine Crossroads to meet them. Deploying their troops in the woods along the edge of the open ground between the Sabine Crossroads and Pleasant Grove to hide their exact strength and disposition from the enemy the Confederates had to beat the enemy and capture their wagon train to halt their advance.

Brigadier General Albert L. Lee commanding the Union advance division found the Confederates in position overlooking the open ground between the Sabine Crossroads and Pleasant Grove.  He sent a messenger back to General Banks but Bank chose to disbelieve Lee and ordered him to continue his advance.  So our battle commenced with the entire Confederate force deployed at the end of the woods and the two Union brigades from Lee's Division having taken positions in the open ground in front of them.  The Union 4th Division, XIII Corps under Colonel William J. Landram was still in march column advancing up the track towards Pleasant Grove with the remainder of Banks' men someway back amongst the massive wagon train which was blocking the road. 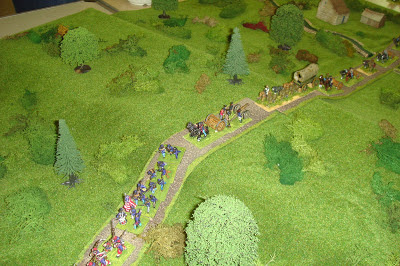 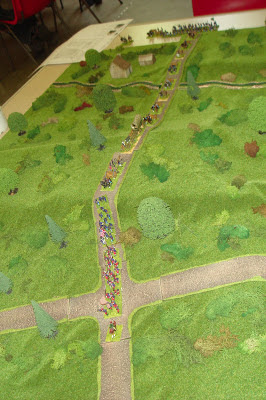 The Confederates saw the substantially outnumbered the lead Union Division and so charged out from the woods towards the Union lines.


Clearly some of the Union troops were taken by surprise as Dudley's Brigade only managed a desultory fire at the incoming Confederate cavalry and the ensuing melee saw the Union troops thrown back and the Rebels breaking through toward the advancing Union column.  The Union right managed to put more resistance and threw the initial Confederate brigade back.

Fortunately the Confederate cavalry didn't have the legs to hit the Union infantry column which gave them time to deploy.  After their initial rebuff Walker's Texas infantry Division regrouped whilst the Union infantry took the chance to fall back towards Pleasant Grove.


Bagby's Rebel horse weren't so lucky this time and Vance's Union infantry fired a decent volley before the cavalry charged home and managed to see them off.  But Lucas' Brigade wasn't so fortunate when Walker's Texans assaulted them a second time.

With Vance's Brigade having checked the Union cavalry it gave time for Emerson's Brigade to form line and cover the retreat of Lucas's rather battered infantry.  Then the fight for Pleasant Grove began. 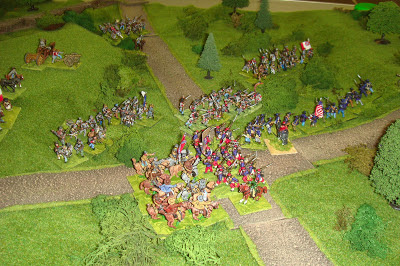 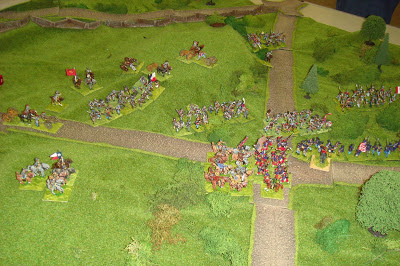 With Landram's Division hard pressed defending Pleasant Grove, Union reinforcements in the shape of Brigadier General Robert A. Cameron and the 3rd Division of XIII Corp began to advance alongside the wagon train.  But they had a long way to travel up through the woods and the Confederate attack wasn't slowing. 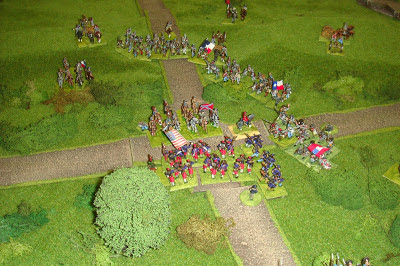 With the sheer weight of numbers telling Landram's Division bravely fought on and, despite having been outflanked by Rebel cavalry they were holding up a large part of the enemy infantry.

The remnants of Dudley's Brigade, who had fled from the first Confederate cavalry charge,  were being pursued by the cavalry and decided to turn and make a fight of it.

But with the Union centre shrinking this small act of defiance wasn't going to be enough. 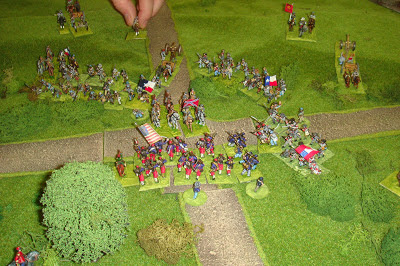 Finally the weight of Confederate fire and numbers took its toll and the grim determination of Vance's Brigade couldn't hold them.  The Union troops fell back but were outflanked by the advancing Rebel cavalry and were caught in an unenviable position. 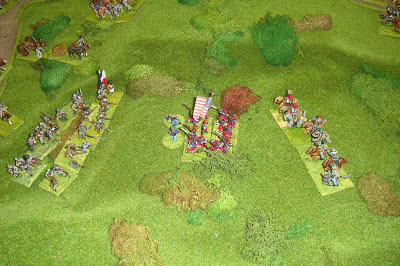 With the lead Union Divisions crushed and the Rebels pillaging the front of the wagon train it looked like it was all over for the Union. 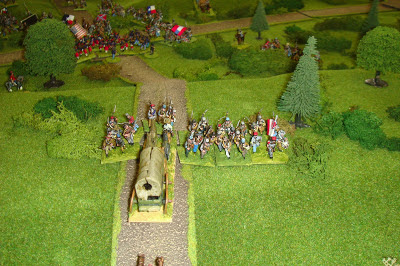 But finally hope was in sight as Brigadier General William H. Emory and the 1st Division of XIII Corp began arriving and forming up behind the stream.

Seeing the danger the Confederates formed themselves up on the ridge overlooking the Union position and dared the Federals to advance!


With battle lines drawn and dusk beginning to fall the Union left advanced towards the Rebel lines. 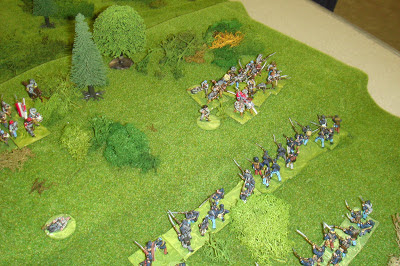 A fight began on the Union left and the Rebels put up a hell of a fight with charges being made by both sides.  Waul's Confederate Brigade almost single handedly held up the main Union attack.  And with the Confederate cavalry having regrouped and advancing around the flank of the Union their position began to look slightly precarious; however, the light failing allowed the Union troops to withdraw leaving the Confederates to celebrate their victory.
Posted by Whisperin Al at 10:11 am