First Play: Wars of the Roses

I was lucky enough to be given a copy of the Z-Man Games Wars of the Roses: Lancaster vs York boardgame for my birthday and thought I would report back on my first game.

Wars of the Roses, designed by Peter Hawes, is a 2-4 player game lasting around 3 hours.  The first thing that struck me was the weight of the box.  Not only is it stuffed with components, they are all really nice quality.  There is a large board depicting England divided into six regions each with their own royal castle, large and small towns and port. There are four thick player screens with castle artwork to conceal the players' planning charts each with useful historical and game related information printed on the inside.  There are an assortment of wooden cylinders and cubes in each of the player colours and some black and white cubes (for bribing the nobles).  Then there are the thick tokens and cards representing troops, money, nobles and the like.  Finally there are the cards representing the locations, nobles etc.  The boards, screens, tokens and cards are pretty clearly laid out and very nicely illustrated. 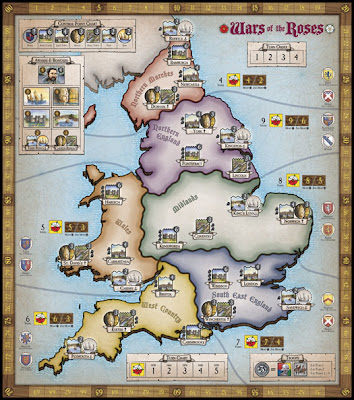 At its core this is an area control game played out over five turns, each representing a number of years.  The objective of the game is to amass victory points through controlling the various regions.  Each turn is broken down into eight phases:
Turn order is determined by reversing the players' positions on the victory point track, thus the player with the least points will go first.  Then a number of cards are drawn and placed face up next to the board,  These represent the castles, towns, ports, bishops, nobles, ship captains and mercenaries.  The players take it in turn to choose a card which will become theirs to control.  Income is determined by totalling up the income generated by the cards that the player controls.  Play then moves on to the planning phase which is the meat of the game. 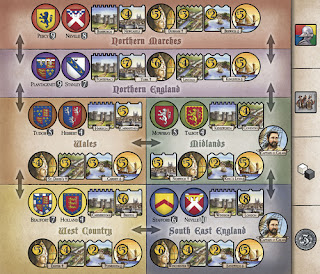 Players need to determine whether to move their nobles and ships, raise troops, bribe their own nobles to stay loyal or opposing noble to swap sides and spend money to influence the King to make them the Captain of Calais.  Other than movement these actions all cost money!  Once all the players have finished planning then the screens are removed and the remaining phases are played out based on what they have planned to do.

Attacks on castles, towns and ports can only be made when a player has a presence in the relevant region, which is where the nobles become important.  Combat is based on a simple majority approach but does deplete your forces dramatically, which is where player order becomes important as locations can change hands more than once in a turn.  Parliament is dependent on the balance of control in each of the areas influencing which house is in the ascendancy.

I have only had a single two player game so far but really enjoyed it.  I suspect that the addition of further players will only make the game more interesting and I am looking forward to getting this back to the table as soon as I can.
Posted by Whisperin Al at 10:44 am 3 comments:

The Devil's Wind are a new set of Indian Mutiny wargames rules by David Bickley. The rules a 43 pages long in full colour and have photographs on almost every page of figures in action on the tabletop.

They are intended for multi-figure bases and can be used with a variety of figure scales. Suggested base sizes are 40 x 50mm for infantry and 80 x 50mm for cavalry and artillery. Units are typically 4-5 bases each and the number of figures per bases is suggested but each takes 4 hits before removal (which will mean either using trays and removing figures, marking the bases or some other form of bookkeeping).

The rules do not have a figure, time or terrain scale and take up the majority of the booklet with only a single sample scenario. They use a mix of d6 and d10 and follow a pretty traditional movement, firing and melee  sequence. The Imperial troops move and fire first and in various situations troops will have to take "pluck" (morale) tests.

I haven't had a chance to play the rules themselves as yet so I can't comment on how they feel but I was rather disappointed with the general layout and editing. The text is generally black on a biege texture background interspersed with brown and uses a variety of fonts and point sizes.  The photographs could have done with either better selection or editing as some are dark or poorly focussed. Whilst all the elements seem to be present the explanations could be clearer and could have done with a good proof read and edit (for example the pluck rules are duplicated in two places entirely word for word).  I can understand the desire for a glossy look but the quality needs to be more than skin deep and a little more time on the layout could have made a huge difference here.

So, in summary, my first impression was that these are a little disappointing for their £12.50 cover price. I am hoping they will change that initial impression when I get a chance to have a couple games with them.
Posted by Whisperin Al at 10:15 am 2 comments: