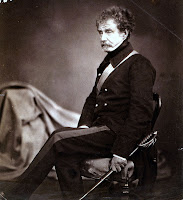 Born Colin Macliver, the eldest son of a Glasgow carpenter, he adopted his mother's maiden name when he enlisted in the army.

After a year he was appointed as an ensign in the 9th Regiment and fought in the Peninsular campaign under Wellington including at Rolica and Vimeiro; the advance to Salamanca and retreat to Corunna.

Promoted to Lieutenant he spent time attached to the Spanish army but rejoined his regiment serving at the battle of Vittoria and the siege of San Sebastian. On 17 July 1813 Campbell led the attack on the fortified convent of San Bartholomé and a week later he led the unsuccessful attempt to storm the fortress itself.

His courage saw him recommended for promotion and he was given a company in the 60th rifles; however this rapid rise slowed somewhat with him taking almost another thirty years to rise to Colonel.
After various postings, in 1841 Campbell went to China was involved in the First Opium War. He was mentioned in despatches, appointed aide-de-camp to the Queen and it was then he was promoted to the rank of Colonel.

He became a Brigadier-General in 1844 and fought in the Sikh Wars in India. Wanting to return to England and retire he resigned his command but in 1854 he was offered the command of one of the two brigades which were to be sent to the Crimea; this appointment was extended to commander of the Highland Brigade of the 1st Division under the Duke of Cambridge. This led to his promotion to Major-General. He fought at the battle of the Alma and was appointed as commander at Balaclava;  however, he became disillusioned and briefly left the Crimea but was persuaded to return and was promoted to the rank of Lieutenant-General taking command of a corps under Codrington; but Campbell only commanded the Highland Division for a month and then returned to England.

On 11 July 1857 the news of the Indian Mutiny and the death of the commander-in-chief in India led Lord Palmerston to offer Campbell the post which he accepted. The following day he left for India, arriving in Calcutta in August.

After spending over two months in the Indian capital organising his forces, Campbell successfully relieved Lucknow for the second time; however, following the relief he chose to abandon the position to the rebels finally retaking it in March 1858.  He continued in command of operations in Oudh until the mutiny was finally extinguished. 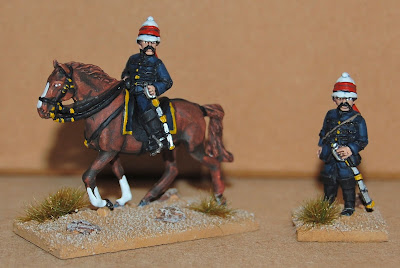 The figures are half of the British Generals pack from Mutineer Miniatures.
Posted by Whisperin Al at 2:01 pm