Our final game was a quick skirmish set during the Indian Mutiny using the Two Hour Wargames' Black Powder Battles rules (not to be confused with the similarly named rules from Warlord Games!):

The British are fleeing from the hordes of mutinous sepoys. They are everywhere but the river seems to offer the best chance of escape. The only thing standing between them and it is a group of Badmashes who are causing some mayhem around the jetty.

Three small parties arrived through the woods from Krishnapur via separate paths closely pursued by some mutinous sepoys.  Between them and freedom was a small village currently being searched for loot by several groups of badmashes. 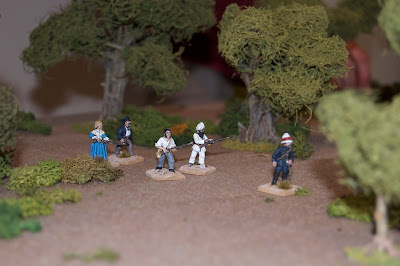 The three groups managed to get close to the village without being spotted but eventually they caught the attention of the ruffians and shots were exchanged. 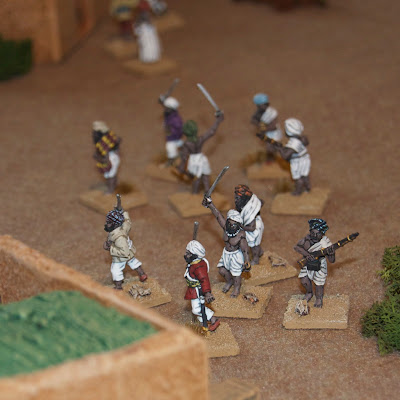 With most of the badmashes only being armed with tulwars they decided to take the fight to the firinghis; however, Captain Oxford and Lieutenant Cambridge were prepared, and their men well trained, so the badmashes ran headlong into some lively fire.  Lieutenant Riley was less lucky and his party were suddenly fighting for their lives. 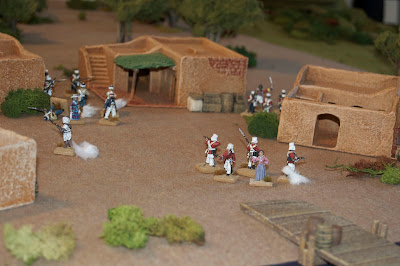 With two groups of badmashes having been dealt with Oxford and Cambridge raced toward the jetty.  Unfortunately for Riley, with his party still engaged in a desperate fight with the badmashes, this allowed the sepoys to catch up and they soon came under fire from the rear.  Two of the volunteers were killed and after a short struggle Miss Vanden-Plas was cut down.

The sepoys rushed forward to catch the escaping British but a firing line had been formed to cover the withdrawal making life very difficult for them. 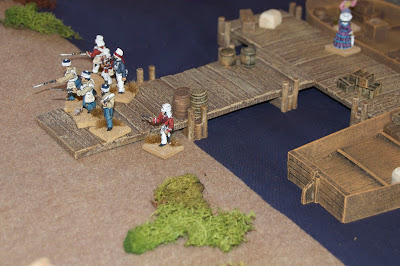 With the remaining ladies safely on the boats the soldiers began an orderly withdrawal and despite some firing from the sepoys managed to move away downstream with only a couple more casualties.
Posted by Whisperin Al at 2:00 pm