The Rani of Jhansi

Lakshmi Bai, the Rani of Jhansi, was originally named Manikarnika and was born at Kashi to Maharashtrian parents. Her father worked at the Peshwa court of Bithoor and, following the loss of her mother, the Peshwa brought her up like his own daughter.

She studied self-defence, horsemanship, archery, and even formed her own army out of her female friends at court. Tatya Tope, who would later come to her rescue during the 1857 Rebellion, was her mentor.

She was married to Raja Gangadhar Rao Newalkar, the Maharaja of Jhansi, in 1842, and thus became the queen of Jhansi. After their marriage, she was given the name Lakshmibai. After their first son died when he was about four months old they adopted Anand Rao, the son of Gangadhar Rao's cousin, and later renamed him Damodar Rao. On the death of the Raja the British East India Company, under Governor-General Lord Dalhousie rejected Rao's claim to the throne on the basis he was adopted and annexed the state to its territories.

When the Mutiny began in 1857 the British were forced to focus their attentions elsewhere and Lakshmibai was essentially left to rule Jhansi alone. She led her troops swiftly and efficiently to quell skirmishes initiated by local princes and maintained a relatively calm and peaceful city in the midst of the unrest in northern India.

At some point she decided to join the rebellion and Jhansi was besieged by British troops under Sir Hugh Rose on 8th June 1858. An army of 20,000, headed by Tatya Tope, was sent to relieve Jhansi but failed to do so following an engagement with the British. Shortly after the besiegers were able to breach the walls and capture the city. The Rani escaped by night with her son, surrounded by her guards, many of them women.

The Rani decamped to Kalpi where she and her troops joined other rebel forces, including those of Tatya Tope. The two moved on to Gwalior, where the combined rebel forces defeated the army of the Maharaja of Gwalior and occupied the fort there. However, on 17 June 1858, whilst engaging the 8th (King's Royal Irish) Hussars in her full warrior regalia she was killed and her body burned.

General Sir Hugh Rose is recorded as saying that the Rani was "remarkable for her beauty, cleverness and perseverance" and had been "the most dangerous of all the rebel leaders". 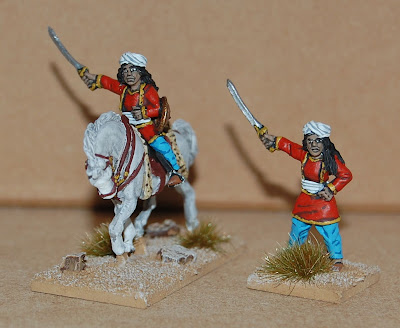 The figures are part of the Indian Leaders pack from Mutineer Miniatures.
Posted by Whisperin Al at 3:12 pm