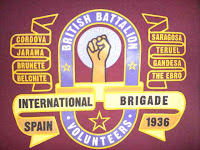 I managed to get down to the club on Thursday and was treated to a 15mm Spanish Civil War game using the TooFatLardies' Triumph of the Will rules.

The game was the Suicide Hill portion of the Battle of Jarama in February 1937.  I had command of the Nationalist left wing including Foreign Legion, Regulares and Carlist troops facing Franco-Belgian volunteers under John with Eric and Daniel taking the centre and right wings respectively.

As we advanced across the open ground we came under rifle, machine gun an artillery fire which took a serious toll.  Eric had the challenge of winkling out some Republican militia from some hard cover on the high ground in the centre which slowed him up somewhat.

My front units took something of a pounding but we continue to advance and eventually closed on the Franco-Belgian units.  They fought valiantly but my better trained and more aggressive troops bested them but not without taking some serious casualties.  Pushing ahead towards our objective, a cross roads well behind the Republican lines, I managed to punch a hole through their units but then came under more artillery fire.

The Republicans moved some of their reserves to plug the gap.  With Eric's troops having fallen behind I was worried that the Republicans would be able to wear me down and stall the advance.  The British Battalion were apparently putting up some fierce resistance to our advance.  Fortunately, our pressure in the centre and on the right was causing them some serious losses.

I deployed my artillery and began counter battery fire which quickly put the Republican guns out of actions.

I threw my Moroccan Regulares forward to assault the Republicans holding the crossroads but after some bloody fighting was thrown back with heavy casualties.  With most of my units spent, Eric changed my orders from attack to engage and I dug in and engaged them with my machine guns whilst I brought the remainder of my Carlists and the Legion up (after they had finished mopping up).

In the end the Republicans conceded victory as they couldn't hold the crossroad.  But we all agreed it could only be considered a minor one as all the Nationalist forces were spent.

All in all a fun game and a result very close to the historical one.
Posted by Whisperin Al at 4:04 pm