Day two began with a journey into alternative history with another game set in the A Very British Civil War world. This game was a follow on from Ashford Ambush which we played last year.

With the Government and Mosleyite forces cracking down on any democratic protest various groups in Kent have decided to take matters into their own hands. A joint operation between the working class Cinque Ports T&GWU Militia and the, mainly upper and middle class, Kent Militia secured more ammunition through ambushing a convoy transporting weapons and ammunition to the Territorial Army barracks in Ashford.

Having split the spoils the T&GWU have returned to Dover and the Kent Militia headed to Chuffnell Regis to meet with the Anglican League. Unfortunately the fascists have got wind of the meeting and a combined force of Police and BUF are on their way to break up the meeting. The Territorials are also on their way to expunge their shame in losing the weapons and ammunition. 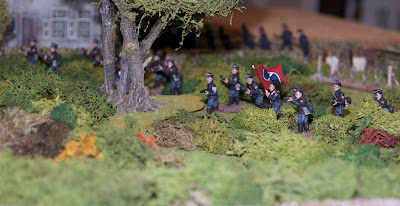 The BUF worked their way through some barbed wire but were soon spotted by Mr Yeatman and the Anglican League troops from their defences in the grounds of Chuffnell Regis and came under some unexpectedly heavy fire. The Commandant Spode quickly recovered from the surprise and ordered his men to return fire. Meanwhile Inspector Chisholm dismounted from the front of his Black Maria and moved his officers into a covered position along the road and also engaged the League. Seeing his verger receiving heavy fire Reverend Farthing suggested to his men in the Manor House that they might, if it wasn't too much trouble, open fire on the BUF. 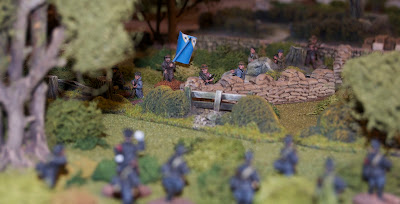 With Sergeant Blakey ensuring the BUF remained steady, the Commandant co-ordinated their fire and the combination of that and the police started to take its toll on Mr Yeatman's men.

Eventually the Anglican League were worn down and the police moved in to arrest Mr Yeatman for causing a serious affray. He was asked to accompany them back to the station.

Meanwhile Mr Chomondley-Warner's convoy arrived at Chuffnell Regis with the Territorials close on his heels. Fortunately "Chuffy" Chuffnell was ready to take charge of some of the men and organised them into a defensive position near the front of the manor. The Territorials advanced up the Ashford road led by their Lancia armoured truck. Almost immediately they came under fire from a lewis gun in the main house well directed by Lord Belborough. Without the tactical direction of Lieutenant George the men in the armoured truck decided things were too hot for them and began to fall back. Commandant Spode moved the BUF forward and engaged Chuffy and his men to devastating effect. Cyril "Barmy" Fotheringay-Phipps bought it and having taken some serious casualties with only him and his man Brackett remaining, Chuffy decided to retreat to the manor house. 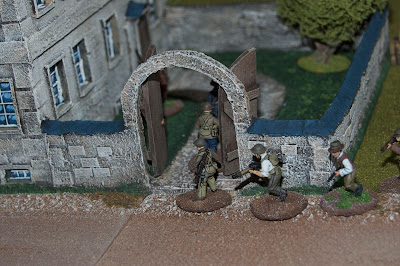 The BUF then moved to assault the manor house from the side but on their way across the lawn they found that Lord Belborough had redeployed the lewis gun and they came under heavy fire. Sergeant Blakey caught a round and having taken significant losses the BUF decided to fall back.

With the remaining Anglican League redirecting their fire onto the police, Inspector Chisholm decided discretion was the better part of valour and began to withdraw his men with their prisoner.  And so Chuffnell Regis (and the munitions) were saved.
Posted by Whisperin Al at 9:14 pm