Ramachandra Pandurang Tope, popularly known as Tatya Tope (or Tantia Topee and various other spellings), was born in Yeola in 1814 and his opposition to the British is reputed to have begun when James Andrew Broun-Ramsay, 1st Marquess of Dalhousie deprived Nana Sahib of Tope's father's pension.

Tatya Tope was Nana Sahib's close associate and general. Following the Siege of Cawnpore the British Forces accepted Nana Sahib's offer of safe passage to Allahabad; however many were either killed or captured. The forces under the command of General Henry Havelock advanced towards Cawnpore and the two forces sent by Nana Sahib to oppose them were defeated. When it became clear that the attempts to use the captives to bargain with the British had failed, an order was given to murder the women and children. The sepoys refused to kill the captives, but some of them agreed to remove the women and children from the courtyard, when Tatya Tope threatened to execute them for dereliction of duty.

Both Nana Sahib and Tatya Tope escaped from the Cawnpore just before it was finally captured by the British. Tatya Tope continued the fight by gathering a large army, mainly consisting of the rebel soldiers from the Gwalior contingent, to recapture Cawnpore. His 6,000 strong advanced guard dominated all the routes west and north-west of Cawnpore; however, they were defeated by Sir Colin Campbell's forces.

Tatya Tope then joined with the Rani of Jhansi but after her death he launched a successful campaign in the Sagar, Madhya Pradesh and Narmada River regions and in Khandesh and Rajasthan. British forces failed to subdue him for over a year but he was betrayed by his trusted friend, Man Singh, Chief of Narwar while asleep in his camp in the Paron forest and captured by General Richard John Meade's troops. After being escorted to Shivpuri, he was tried by a military court. Tope admitted the charges brought before him but said that he was answerable to his master Peshwa only. He was executed on April 18 1859. 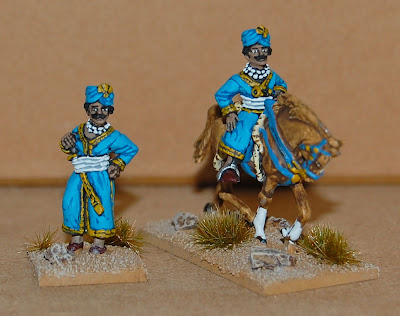 These figures, along with the Rani of Jhansi, make up the Indian Leaders pack from Mutineer Miniatures.
Posted by Whisperin Al at 3:38 pm