Wargames Weekend: The Battle of the Fords

Next up was a Dark Ages game, both to get some of my figures, which haven't been out in a while, back to the table and to give Saga another outing. It was also a chance to put the other faction dice and accessories I picked up at Salute some use.

We decided to use the standard 6 point warbands and scenario 2 - the Battle of the Ford from the rules. Lenin chose to be Anglo-Danish whilst I was to be Norman (which we decided placed the engagement nicely in the post-Hastings period). Lenin took a large (8 figure) unit of axe armed Huscarls (Hearthguard), three units of Ceorls (Warriors) and a unit of Geburs (Levy) whilst I opted for two units of mounted Knights (Hearthguard), one unit mounted and three units dismounted Sergeants (Warriors) with one of the foot units armed with crossbows. 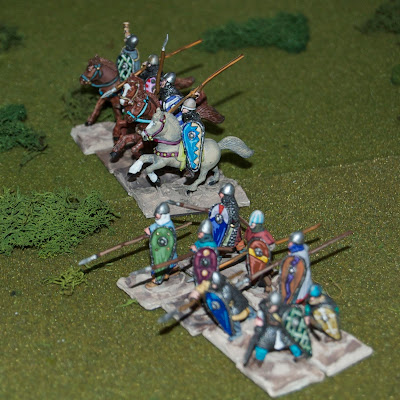 Lenin rolled highest and deployed half his force, I then deployed and he finished off. It was clear we had both chose to split our men between the two fords with the Huscarls and Knights concentrated on the ford to my left. Having forgotten how the last game played out I had deployed my Warlord in the centre rather than with one flank or other.

Deciding that I needed to take advantage of my mounted troops I advanced my crossbowmen and fired and then, rather too impetuously, charged one of my units of Knights across the ford and into the approaching Huscarls. As might be expected I had my backside thoroughly kicked and started to remember how much planning needs to go into attacks if they are to be successful! 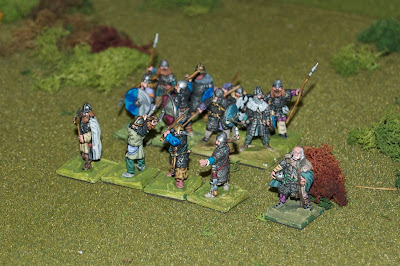 Lenin then advanced his Geburs, armed with bows and slings, to engage my crossbowmen in the centre. With his Warlord over on his right flank I could see an attack happening there, so I advanced my Warlord and second unit of Knights supported by some dismounted Sergeants to cover that ford.

Lenin also started to organise his Ceorls on his left. Again I got a little impetuous and advanced my mounted Sergeants across the ford and into his leading unit of Ceorls. Once again this didn't quite go as planned and my men were repulsed with quite a few casualties. 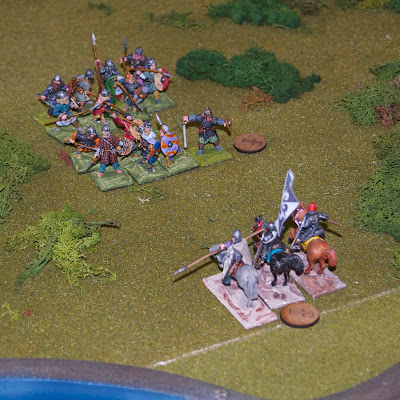 Leaving his battered Hurcarl unit (they had taken some damage from my charge and volleys of crossbows), Lenin used the Obey Me command to advance his Warlord and his Ceorls) across the ford and attacked my Warlord. Fortunately I had anticipated the attack and had allocated some dice to my Charge! and Stamping abilities and so was able to throw his assault back - although it did cost me one of my Knights who valiantly threw himself in the way of a killing blow. I then returned the favour and, using the same approach, attacked his Warlord with mine and my remaining mounted Knights. A combination of good dice rolls and the Charge! attribute saw his Warlord trampled into the dust and his Ceorls decimated after defending the Warlord with their lives. But my follow up attack saw my Warlord struck down too. Lenin then attacked my mounted Sergeants at the other ford but luckily I managed to throw him back.

At this point, with dinner approaching, and neither of us successfully made the other bank of the stream we decided to call the game a draw.

As in our previous game it quickly became clear that Saga is all in the planning - something I really need to remember. Working out which attributes to use and when is critical - just rushing in without preparing the ground is likely to get you killed! The Warlord is key, his free activation and Obey Me ability can be enormously valuable but you don't want to lose him - even if this isn't a victory condition - as it hits you where it hurts - in the dice pool!
Posted by Whisperin Al at 11:58 am