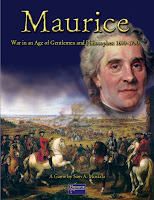 Our second game was a real play of Maurice using my recently completed War of Spanish Succession figures.  We opted to have a basic game to begin with so without National Advantages or Notables - leaving those for the next game.  Lenin took command of the British forces (attacking) and I took the French (defending).

We used the terrain generation from the rules.  Lenin picked the Urban card and, having rolled the dice, we both selected the low numbers so we ended up with a relatively clear table - two built up areas connected by a road with a hill and a wood.  The objective was then placed in the built up area on my side.  As the defender I deployed first with my two squadrons of dragoons on the left wing, my five battalions of infantry in the centre and the three cavalry squadrons on the right.  I made the huge mistake of splitting my three artillery batteries and placing in between the infantry units.  Lenin deployed his cavalry on his left, half the infantry to the left of the hill, all three artillery batteries on the hill itself, the remaining three battalions of infantry between the hill and the wood and his two squadrons of dragoons behind the woods. 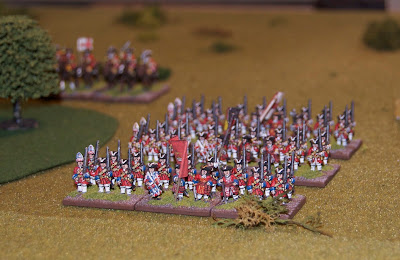 Things began slowly with the British artillery bombarding my infantry for a couple of turns as Lenin familiarised himself with the rules and the cards.  Then he advanced the three battalions of infantry on his left.  I decided to threaten the infantry with my cavalry, Lenin responded and so a cavalry clash ensued.  I thought I would have the upper hand as I had the Stirrups In card but Lenin also had it! 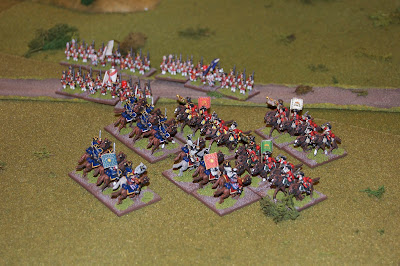 Unfortunately lady luck wasn't with me and the cavalry melee saw my squadrons being pushed back.  In the following round the front two broke.  I threw my final squadron in and had a little better luck but eventually they broke too - leaving Lenin free to advance his infantry on his left.

To try to hold the infantry on his right flank I advanced my dragoons.  My initial charge was repulsed but the dragoons reformed and charged again but were thrown back again.  The tactic was only being partially successful as the front battalion of infantry engaged me whilst the two behind formed column and advanced to the centre of the field.

With my left flank hanging due to the loss of my cavalry I moved my reserve infantry to plug the gap whilst Lenin pushed all his infantry forward.

My artillery bombardments were pretty ineffective as I couldn't co-ordinate them having split them up and so the British came on.  Musketry was exchanged followed by the British charging in.  My battalions held and threw the British back.  They came on again and were repulsed again but one of my units broke.  I decided to counter attack but lady luck deserted me once again and my attack was unsuccessful.  Fortunately, I was saved by the failing light and the British were forced to withdraw.

Maurice played pretty well, although I think leaving out the National Advantages was a mistake as Lenin was concerned about the "flavour" being missing (and thus being more at the game end of the game/simulation spectrum).  The game started slowly as we both got the hang of things but picked up after that and had a nice ebb and flow.  It certainly provides some real challenges with you wanting to keep cards for their effects but needing them for their span.  The game was really close with my army morale down to two and Lenin's down to one (at least in part due to my sharpshooters taking out some hero on his side!) - and darkness ending the game.  We're certainly going to give these another outing.
Posted by Whisperin Al at 3:03 pm