Four our first tabletop game of 2103 we decided to give A World Aflame it's first real outing.  When I took my first look at these I wasn't too sure how they would work out on the table and so this was a real chance to try them out.  I was also my first chance to get my new 4Ground buildings out.

I developed a scenario which followed on from our last game, Chuffy's Challenge, with Lenin, once again, taking the helm for the Anglian League alliance forces and me reprising my role as the guardians of law and order:

Following the engagement at Chuffnell Regis, Inspector Chisholm has taken his prisoner back to the new Police and BUF headquarters at Richester Castle. After the heavy fighting in and around Richester and their subsequent victory the fascist forces are feeling secure in their new stronghold.

Having allowed his verger, Mr Yeatman, to be captured, the Reverend Farthing is beside himself but is uncertain how to proceed. Fortunately, Dean Lionel Pugh-Critchley of St Ogg’s arrives and takes charge. He insists that Mr Yeatman cannot be left in the hands of the fascists and must be rescued. So contact is once again made with the local Kent Militia and the Cinque Ports T&GWU and a daring plan is hatched...

Not expecting an assault the garrison at Richester Castle had been reduced, with the Territorial unit normally stationed there having been sent out on a routine patrol, the castle was only manned by a small unit of Police and the local BUF.

When one of the sentries heard an ominous clanking sound the Police turned out but a storm rolled in and a torrential downpour began reducing visibility and making things generally unpleasant. 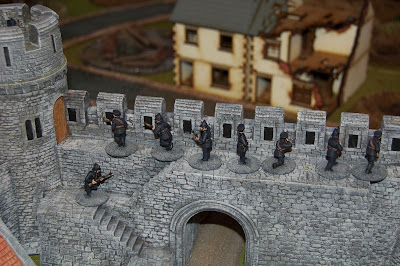 Meanwhile, the League supported by the Kent Militia under Mr Chomondley-Warner and the Cinque Ports T&GWU led by comrade Spanner, were stealthily advancing on the castle.  Well, a stealthily as they could given the union had brought along their latest toy - generously donated by their Soviet brothers - a T26! 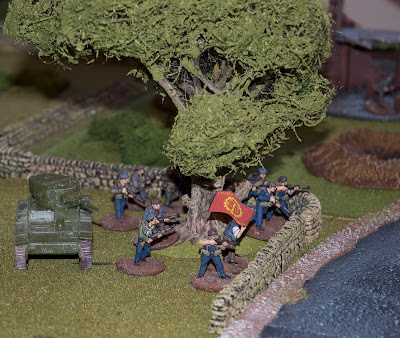 With the League moving their forces into their assault positions which could be seen from the castle, at at that crucial moment, the bobbies on sentry duty decided they needed a brew and went inside.  With this stoke of good fortune the League moved into position unseen.  But when they were about to launch their assault they found that Inspector Chilholm had rounded his men up and got them back onto the ramparts!

A firefight broke out but the weight of the League fire, particularly their machine guns, took its toll on the Police and as their numbers shrank their morale cracked.

With this positive start to the assault, one of the T&GWU thought they might not be needed straight away and suggested that they pop off and celebrate the success of the attack at the local boozer (having only been paid the day before).

Despite the loss of the union men, the Kent militia pushed forward into the castle bailey.  There they found that the firefight had alerted the BUF, who had hastily taken up positions. 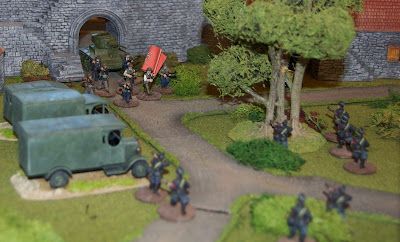 A brief exchange of fire saw Sergeant Blakey of the BUF catch a bullet and his mens' morale broke and they ran for the castle keep - closely pursued by the Militia.  Further firing from the Militia saw the BUF surrender and Commandant Spode, seeing the day was lost, decided to release Mr Yeatman on condition the League forces withdrew.

---
So that was our first game with A World Aflame.  Overall the rules worked reasonably well and the cards certainly helped with the narrative of the game.  However, the rules could certainly have benefitted from some more explanatory examples and felt a little rough around the edges.  It was clear that the morale system meant needing quite a few forces on the table as they could provide quite brittle and once a leader has been lost (which seemed a little too easy) it was a bit of a slippery slope with little chance of recovery.  The rules certainly have some things going for them and we may well give them another go.
Posted by Whisperin Al at 11:35 am

Email ThisBlogThis!Share to TwitterShare to FacebookShare to Pinterest
Labels: 1938, 28mm, A World Aflame