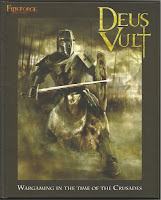 The Medieval period and, in particular the Crusades, have long been of interest but it's another one where I have found it difficult to find a set of rules I was happy with for more than a skirmish.  So when I spotted that the new Deus Vult rules from Fireforge Games was in the NorthStar sale I ordered a copy.

The rules come as a hardback book, in the smaller Osprey size rather than the larger Black Powder format, they are 192 pages in colour and are split into 16 main sections.  The rules themselves are around 75 pages in a two column format interspersed with photos and art work with a side bar containing explanations and quotations. 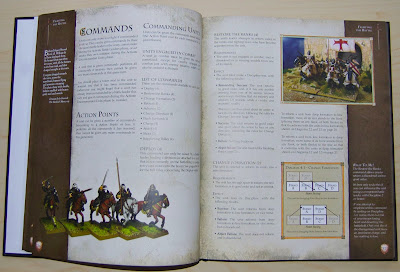 The rules are written for 25-30mm figures and a 6' x 4' playing area for two players but there are specific sections which allow you to use different figure and table sizes along with more players.  Figures are intended to be individually based but on movement trays (to allow for casualty removal) with infantry on 20x20mm bases 6 to a stand (3x2) and cavalry 25x50mm 2 to a stand - but they also have suggestions as how to deal with differently based armies.

The rules are principally d6 based, although d4, d8, d10 and d12 are used for the leader duels.  In some cased you can end up rolling quite a few dice - which is great if you like that sort of thing!  Army lists are provided for the Early Crusader States 1100-1128AD and the Arab Dynasties 945-1150AD with some sample units for other eras (e.g. Teutonic Knights, Seljuk Turks) with the full lists coming in supplements to be release later. 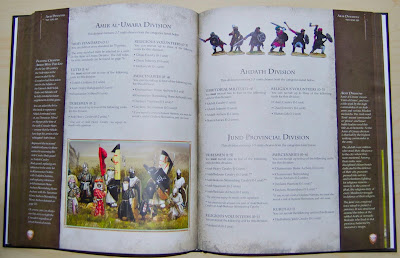 Armies are built in Divisions each commanded by a Battle Leader who is pretty crucial to their success although more from an activation and command basis; however, they do have some attributes which seem like they could be pretty handy.  There is an interesting pre-battle phase with the opportunity to using scouts to influence terrain and deployment and also to introduce some subterfuge which should add some interest value.

A set of seven different battle scenarios are provided covering everything from a stand up fight to an encirclement.  There is also a summary of the Crusades but not much detail on any of the battle unfortunately and an overview map.  This is followed by an almost blow by blow account of the fictional battle of Samosata, some advice on flexing the rules and creating new scenarios followed by a set of game aids and the reference section of the rules but no separate quick reference sheet.

I must be getting old but the small typeface and fonts used on the back cover and side bars (especially as it's white on dark brown) I found rather hard to read.  The rules themselves are relatively clear and the scenarios seem to have a good range of options.  I was initially put of by the points system but that's not a deal breaker for me as it is a useful tool for evaluating the relative power of different units and abilities.  There's some nice eye candy with the photographs and artwork which certainly provide some inspiration and the sample battle really helps to put the whole thing together.  I am really looking forward to giving these a try on the tabletop.

Amazingly enough this is actually my 500th post on the blog so that's another little milestone I've reached!
Posted by Whisperin Al at 6:33 pm