The Marshes of Mount Liang

Lenin came over for the New Year and we managed to get a few games in before the old year was out. The first was our first play of Hail Caesar using Lenin's latest acquisition - some Sun Chinese.

The outlaws of Liangshan (Lenin) thought they are safely protected by the treacherous marshes that surrounded their mountain hideout; however Governor Kao Chiu (me) had discovered a secret route through the marshes and decided to take the traitors by surprise!

There were, in fact, two paths each passing through the jungle, across a ford into the marshes to another river crossing - on one case another ford and in the other a bridge.  I decided to split my forces, half the infantry and my light troops down the first path and my remaining infantry and cavalry down the second. 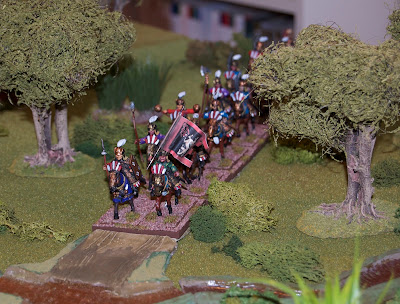 The infantry force managed to cross the first ford without incident and advanced into the marshes; however, my second group found their ford to be defended.  With the crossing being relatively wide and shallow, I formed up my cavalry and charged across, spray flying, into the traitor's skirmishers. 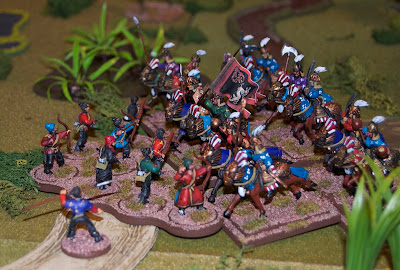 The skirmishers fired their bows and formed up before I smashed into them.  But they were no match for my cavalry who charged them down and captured their leader.

Having cleared the way my second force began to advance.  It was clear that both the next ford and the bridge were both defended and by more than just some skirmishers!  With Lenin forming up his cavalry to enable them to cross the bridge, I decided to hold my cavalry back ready to charge him.  He spotted the danger and held his cavalry before they crossed the bridge.  I advanced my supporting infantry and we began to exchange crossbow fire across the river.

At the other ford I had my infantry form up but they came under a hail of crossbow bolts from the temple ruins on the other side.  My light troops were taking casualties but I managed to concentrate enough fire to eliminate one of the enemy units.

Seeing the danger at the ford, Lenin reformed his cavalry and moved them across to it.  Then he readied them and charged across the ford into one of my infantry units.

I wasn't as easy meat as his skirmishers had been and his charge faltered.  He regrouped and charged again but to no avail.  With my crossbow fire taking its toll his units began to fail and the day was ours!

Hail Caesar is, as we expected much like Black Powder in a number of respects (for good or ill depending on your perspective); however, it is different in a number of areas and this made the rules a little slower to pick up than we had expected.  As with Black Powder the rules are intended for big, relatively quick games and, as such, certain choices have been made.  I felt the rules didn't have enough flavour to them - but that's an entirely personal perspective and I'm generally biased against rules which try to cover the whole "ancients period" - but I can see them being a useful set to have where you don't have a more period specific set.
Posted by Whisperin Al at 2:33 pm