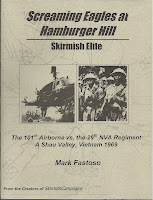 The final book in my Skirmish Campaigns collection is a Skirmish Elite book and it moves us on from WW2 to Vietnam - Screaming Eagles at Hamburger Hill.  It centres on the US 101st Airborne's struggle to capture the NVA strongpoint on Dong Ap Bia (Hamburger Hill) in May 1969.

The book starts with a three page introduction and history including some designer's notes; a very short bibliography (it only has 2 items) and a campaign map.  This is followed by a two page explanation of the Skirmish Campaigns format and a table detailing how to translate the scenarios to various sets of rules before moving into the actual scenarios. 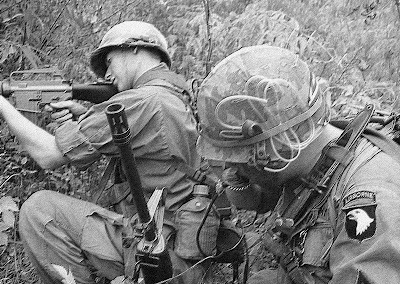 There are three campaigns:

The scenarios are all infantry, roughly platoon size or smaller, and are set in hill and jungle with the exception of the third scenario which centres on an NVA night assault on the airborne firebase.  Several of the scenarios require a number of two man bunkers and tenches for the NVA.

The first campaign is a couple of encounter engagements and the NVA assault on the firebase.  The second campaign is the frontal assaults on the NVA positions and their counter attacks.  The final campaign has two quite different scenarios, the first is an ambush on Col. Honeycutt and his party moving from the LZ up a trail whilst the second is the final battle for the hill top. 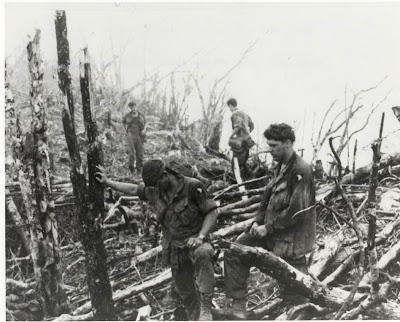 I picked up this copy from Lenin mainly for interest as I do have some Vietnam forces in both 20mm and 28mm (although the 20mm stuff is USMC rather than airborne) and so haven't yet got any of these to the table.
Posted by Whisperin Al at 3:26 pm