First Look: Strike of the Eagle

I was interested in getting this particular game for a couple of reasons.  I am interested in the Polish Soviet War itself, the game has a different take on the usual block game mechanisms and it is capable of accommodating more than 2 players.

The board represents the part of Poland, Soviet Russia, the Ukraine and the disputed land between them.  It is divided into two fronts, effectively separated by the Pripet Marshes, which mean that in the full game the units on each front can be split between players allowing up to 4 people to play.  Movement is point to point and the board shows the various towns and cities of the area and the road and rail links between them.

Whilst this is a block game with the usual fog of war that brings it adds some interesting new dynamics through the use of cards and orders.  Each side has a deck of cards and can use these for one of four different things:
This provides some serious choices and decisions as you normally only a hand of 6 cards at the beginning of each turn and their are five operations phases when they can be used within each turn.

The orders are represented by thick card counters which are placed either on individual locations and units.  You have to place one recon order each turn which allows you to see the enemy blocks where it is placed and whilst this can be used to bluff the enemy it does mean that you only get one further order each phase unless you play a card to increase it.  The other orders are movement to or from a location (infantry one space, cavalry two spaces), forced marches (as movement but a further space), withdraw (if attacked), defend, reorganise (regain a single strength point) or rail transport (move up to 4 blocks up to 8 spaces along rail lines). 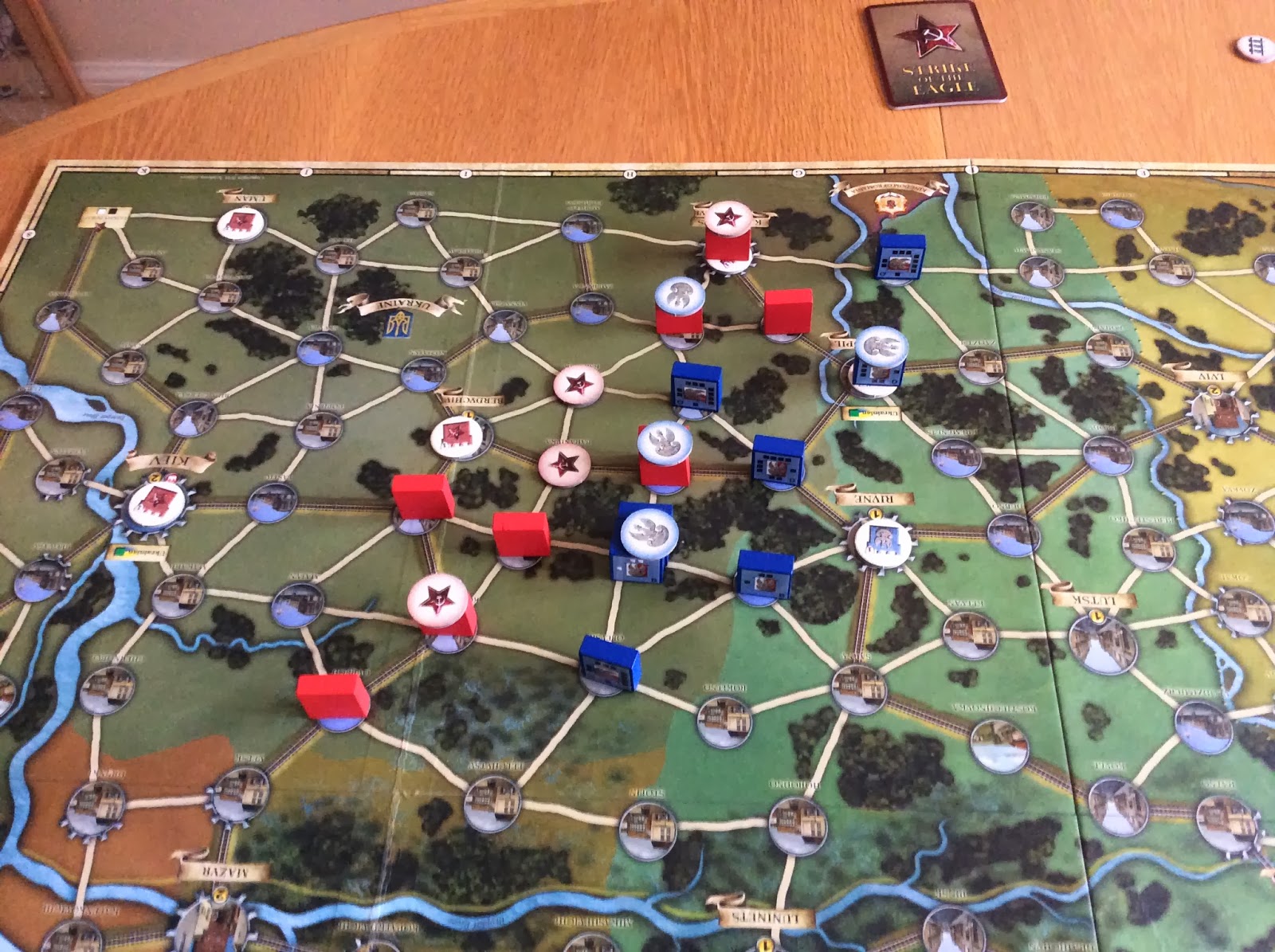 Initiative is tracked separately on each front and this allows the player with initiative to determine the order in which orders are placed and, within the order sequence, who reveals and executes their orders first (which can be critical as blocks can be pinned in place by advancing blocks).

Each block represents between 1,500 and 8,000 men as represented by its individual strength point value (and as you would expect adjusted by rotating the block) which is then combined with various modifiers and the value from a card to determine how many strength points are lost by the other side making the combat diceless.

Supply lines are important too and can have a serious impact if units end up out of supply.  There are also leader blocks which have other effects.

The game comes with 9 scenarios (I have only played the first - the introductory scenario - shown above) which provides for plenty of replay-ability.

The game is beautifully produced, has a good amount of historical information included and provides some really challenging decisions - I am looking forward to getting it to the table again.

If you want to know a little more here's a video review of the game from Marco Arnaudo: