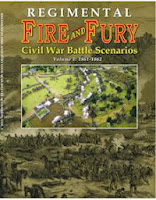 Having enjoyed paying the Brigade level Fire and Fury rules I picked up a copy of the Regimental level version.  With this now tried on the tabletop I thought it would be worth "investing" in a copy of the scenario booklet for the Regimental rules.  I have both of the equivalents for the Brigade level rules and thought they were well put together and have played a few games from them.

The book is sub-titled "Volume 1: 1861-1862" which both indicates more to come (?) and the period it covers.  It is paperback in colour, in letter format and runs to around 80 pages.  It starts off with a brief foreword and introduction followed by some new "optional rules" covering Skirmishers, changes to Extended Line Frontages, Twilight & Night Turns, Change Front manoeuvres, Plunging Fire through Wooded High Ground and Massed Artillery Fire.

The book covers 11 engagements (some with multiple associated scenarios) from various battles or smaller encounters.  Although when I say small it must be said that none of these scenarios can be considered "small" in the sense of the number of troops required.

Each scenario follows a similar format with an introduction providing the historical background, a description of the scenario itself, then moving onto the terrain.  This is followed by an Order of Battle in both a summary table and diagrammatic format (which can be copied to provide the labels for the units) along with any specific arrival timing or other restrictions.  The game length, victory conditions and any special scenario rules are then set out.  This is all accompanied by a scenario map.

I had hoped that this would provide me with some useful scenarios to get me going with the rules; however, I found that despite having what I considered a reasonably sized collection (about 100 stands per side) I didn't actually have enough troops or enough of the right troops for any of the scenarios.  Of course you can choose to rescale or adapt the scenarios to fit your own requirements but this does rather reduce the benefit of having pre-made ones.  I guess I will just have to buy more troops!

As with the previous Brigade level scenario booklets this one is well presented but whether you consider it represents good value will depend on looking carefully at the content.
Posted by Whisperin Al at 6:18 pm

Email ThisBlogThis!Share to TwitterShare to FacebookShare to Pinterest
Labels: acw, fire and fury