Just in case you've been hiding in a cave somewhere you may not have been aware of the release of the latest set of rules from the TooFatLardies - Chain of Command - which are designed for Platoon level games using a 1:1 man to figure ratio.

Given that I have enjoyed playing most of the Lardies' previous offerings and having had my appetite whetted by their YouTube videos, I decided to take the plunge and pre-ordered the rules.

I went for the bundle which included a hard copy, the tablet enabled PDF version, the branded dice, markers and the resin jump off points.

It may seem a little strange to have both the hard and soft copies but I have to admit that having a real book to read through and consult is still something I like - even this far into the 21st Century; however, the PDF does have the advantage of being searchable and so is more useful for checking on things during a game. 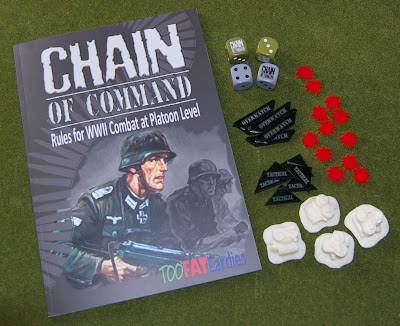 The hard copy is produced in a very similar style to I Ain't Been Shot Mum III, their company level rules, in that they're an A4 paperback.  They are 104 pages in a two column format broken up with pictures, diagrams, tables and examples: 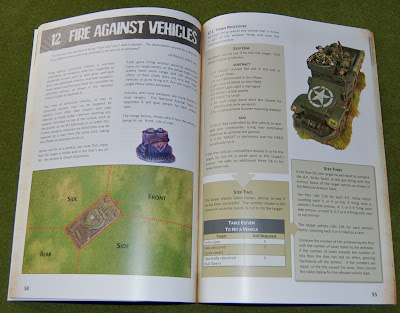 The core of the gameplay will be familiar to anyone who has played the recent offerings from the Lardies with command activations, variable movement distances and shock; however, they have two new features which make these rules quite distinct.

The first is the patrol phase - this happens before the main game with both players moving patrol markers in order to determine the limits of the scouting that both forces have carried out before the engagement.  Once completed this will establish the non man's land between the two forces and their available jump off points.  The jump off points represent the locations which the units can reach safely without being observed or engaged by the enemy and provides a really interesting advance from the standard Lardies blinds system.  The new approach allows for flexible deployment, ambushes and the ability for the enemy to secure on of your points and really limit your options.

The second new feature is the dice activation system and associated Chain of Command dice.  Rather than using a card activation system (which has long been one of their trade mark mechanisms) Chain of Command has each player roll a number of dice determined by their force and affected by in game results.  These dice then determine whether teams, sections or leaders may be activated or whether the Chain of Command dice should be increased or whether the turn will end.  Turns are divided into a variable number of phases with initiative alternating (unless determined otherwise by the activation dice roll) and only ending on specific rolls of the activation dice.  This approach makes each phase and turn somewhat unpredictable giving you some real challenges and decisions to make.  When a leader is activated they can use their command activations to activate individual teams or sections, or to remove shock etc.  The Chain of Command dice build up until they reach a level which allows you to use them for certain bonus activities - like deploying some troops in an ambush or ending the turn - providing additional options.  All in all they sounds very interesting and I'm looking forward to getting them to the table shortly.

The rules also cover all the other stuff you would expect (support weapons, vehicles etc.) and include six generic scenarios and army lists for Germany, Great Britain, the US and the Soviets.

The accessories I picked up included four nicely cast resin jump off point markers (each different), acrylic pinned (12), tactical (6) and overwatch (6) markers, and four large d6 with Chain of Command printed on one side (in place of the six).
Posted by Whisperin Al at 9:57 am