I was in two minds as to which rules to use for the game but ended up plumping for Pike & Shotte as I wanted to give them another try and they had most of the stats I needed for the game already worked out!

Having offered Lenin the choice of sides he decided to take the Covenanters and left me with the the Royalists and a real challenge - not just the historic lack of cavalry and ammunition but also the benchmark of the historic result!

Deployment was broadly consistent with history (despite the overall reduction in forces) with the Royalists behind the burn and the Covenanters on the ridge.  The Royalists had Kilpont's archers on the left, the Irish under McColla in the centre and the Highlanders under Montrose on the right.

With the Covenanter commanders rated much poorer than Montrose, Lenin had a few issues with getting his troops to move.  He rather regretted deploying them in line an not column on the road which might have made all the difference!

I advanced the Highlanders and the Irish to threaten the Covenanter left flank.

The Covenanters stood firm (despite Lenin wanting them to advance!) and fired their artillery. 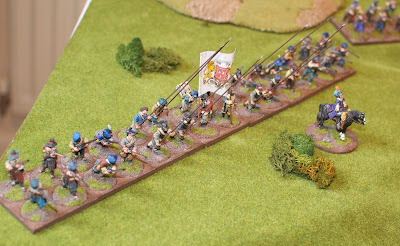 With the Covenanter horse threatening to charge the highlanders decided to pre-empt that and the real fighting began.

The Irish formed up in the centre under increasing artillery and musket fire but held their single volley.

But the highlanders had cut through the Covenanter cavalry and charged on across the ridge finally engaging the Covenanter musketeers and throwing them back too.  A final push broke the Covenanter army morale and the day went to Montrose!
Posted by Whisperin Al at 11:01 am