Flying Lead through the Stargate 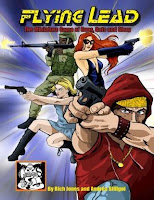 Lenin decided to give his Stargate figures an outing and put together a game using the Ganesha Games' Flying Lead rules.

I took the part of SGC team and Lenin played the Goa'uld System Lord and his Jaffa bodyguards.

My team arrived through the Stargate to find the Jaffa on the far side of some ruins attempting to reach a ring transporter with the "device" they had discovered and escape from the planet.  Our job was to stop them!

I have to say that I'm not a big fan of the Songs of Blades and Heroes activation system which is part of the engine for the Flying Lead rules but despite that the game trundled along at a reasonable pace.

In the end I managed to take out most of the bodyguards and the System Lord at which point the morale of the remaining Jaffa broke and they fled allowing me to recover the "device".
Posted by Whisperin Al at 11:18 am