My final French foot unit for this phase of the project is the Régiment Royal which was first raised in 1656.  In 1703 the first two battalions of the regiment were in the Battle on the Speyerbach where it lost its colonel-lieutenant the Marquis de Calvo. Pierre René de Brisey Comte d'Enonville was appointed as its new colonel-lieutenant.  The following year the regiment fought at the Battle of Blenheim where it was forced into Blenheim village and a large part was taken prisoner. After the Battle the remnants of the regiment were collected at Thionville and rebuilt at Sédan.  The regiment royal was also present at the Battle of Oudenaarde but was not engaged. 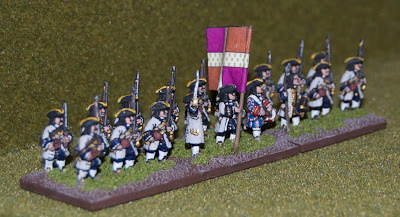 The figures are from Black Hat and the flag is from Warflag.
Posted by Whisperin Al at 9:47 pm