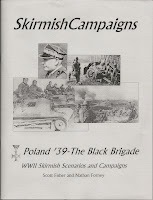 The next in my collection of Skirmish Campaign books is the first in what is their core period - World War II - it's Poland '39 - The Black Brigade.  The book focuses on September 1939 and the actions involving the Polish 10th Mechanised Brigade, of the Army of Krakow, under Colonel Stanislaw Maczek in their struggle against the German invasion.

Poland '39 - The Black Brigade is a 56 page, black and white, staple bound book in US letter format which includes 10 scenarios forming four campaigns.

The book starts with a single page introduction, a two page explanation of the Skirmish Campaigns format, a table detailing how to translate the scenarios to various sets of rules, a strategic map, three pages explaining the campaigns, six pages of background history and a selected bibliography before moving into the actual scenarios.

Whilst the infantry requirements for the scenarios are all relatively small, the majority of them require armour of some sort.  The Polish are mostly equipped with TKS tankettes or Vickers E light tanks and the Germans with SdKfz 222 armoured cars or PzKpfw I or II light tanks with a few motorcycles thrown in.  The largest scenario calls for 4 x Pzkpfw IIc, 1 x SdKfz 221, 3 x Vickers E and 3 x TKS (2 with MGs and 1 with a 20mm cannon) along with assorted other vehicles.  With regard to terrain, most of the scenarios are pretty straightforward with not too much requirement for buildings, just light woods, hills and some fields.

I have yet to play any of the scenarios from the book, but will be able to once my Polish figures are painted; however, that will be using a little poetic licence as my figures aren't right for the Black Brigade (who wore the German 1916 pattern helmet and black leather coats - hence the unit's nickname).  A small range of suitable 28mm figures are now available through Gorgon Studios.  Clearly some of the scenarios, especially the larger ones, may make more sense in a smaller scale given the amount of vehicles (although a TKS doesn't actually take up much space!). 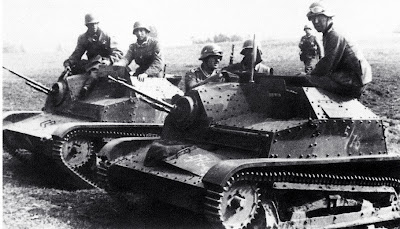 If you are interested one of the scenarios, Rabka-Mszana Road is available for download.
Posted by Whisperin Al at 5:16 pm