Originally raised in 1635 by Cardinal Richelieu, under the name of Régiment de Dragons du Cardinal (the Cardinal's Dragoon Regiment), the Regiment passed to the King on the Cardinal's death in 1641 and was renamed the Régiment de Fusiliers à Cheval du Roi (The King's Regiment of Mounted Fusiliers); and finally, in 1646, it was renamed the Régiment du Roi – Cavalerie (the King's Regiment (Cavalry)).  At the Battle of Blenheim, the Regiment formed part of the Marquis de Broglie's Brigade under the Comte de Zurlauben between Blenheim and Oberglauheim. 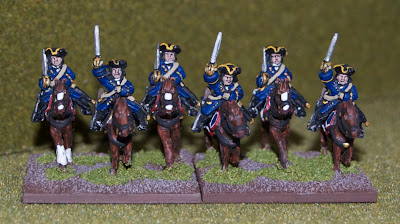 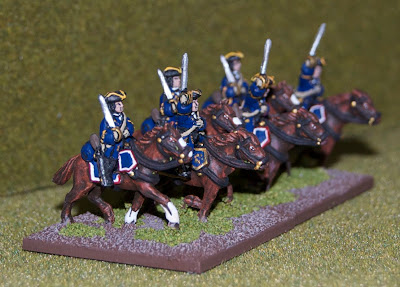 The figures are from Black Hat.
Posted by Whisperin Al at 2:00 pm