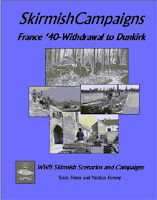 Hot on the heels of the Ghost Division, my next Skirmish Campaigns booklet is one of the follow ons, it's entitled France '40 - Withdrawal to Dunkirk.  The follows the last days of fighting around the Dunkirk perimeter in May 1940.

France '40 - Withdrawal to Dunkirk is a 60 page, black and white, staple bound book in US letter format which includes 12 scenarios forming five campaigns.

Once again, the book has the standard Skirmish Campaigns structure, starting with a single page introduction, a two page explanation of the Skirmish Campaigns format, a table detailing how to translate the scenarios to various sets of rules and a strategic map (with a small paragraph below showing how to roll the five campaigns into a single grand campaign); however, it restricts the history to a single page followed by the bibliography before moving into the twelve scenarios.

The first two scenarios are infantry only but involve bicycle mounted Germans versus Belgian troops (although the bicycles are easily resolved and they could be converted to other Allied troops).  The next scenario has German infantry facing 5 Dingo scout cars possibly supported by a universal carrier and crew or an A9.  Along with some British and German infantry and German trucks the fourth requires 2 x PzKpfw IIc plus 2-4 PzKpfw IIIe or 2-4 PzKpfw IVd as variable attachments facing 3-5 x A9, 2-3 x A10 and 3-6 x Mark VIB although the larger numbers are as a result of variable attachments again but quite a number as you can see.  The fifth has 4 x PzKpfw IIc, 2 x PzKpfw Ib, 2 x PzKpfw IIIe, 3 x A9 and a Mark VIB plus a kubelwagen, a SdKfz 251/1 and 4 motorcycles with sidecars along with the accompanying infantry.  The sixth and seventh are infantry only scenarios, although some British trucks are called for in the sixth and a universal carrier and German motorcycle combinations as variable attachments in the seventh.  The eighth sees German infantry facing the French in trucks with 3 x R35 with an additional 2 x R35 and 2 x PzJaeger as variable attachments.  The ninth is similar but asks for 2 x H35 in addition.  The tenth is Germans versus British infantry but the eleventh sees the Germans needing 2 x PZKpfw IIIe, 2 x PzKpfw 35(t) and 2 x PzKpfw IVd as variables.  The final scenario is similar.  A number of the scenarios, particularly the later ones require quite a few buildings but otherwise are all relatively straightforward.

I have only managed to get one of the scenarios to the table, which was in 20mm at the club (some photos here).  I do have plans for adapting a couple of the others to enable them to be more practically playable with my collection though.
Posted by Whisperin Al at 10:31 pm