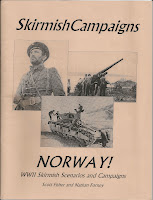 The second WW2 book, chronologically, in my collection of Skirmish Campaign books is Norway!  The book is centred on the German invasion of Norway in April 1940 and the Norwegian, British and French response.

Norway! is a 56 page, black and white, staple bound book in US letter format which includes 10 scenarios forming two campaigns.

The book starts with a single page introduction, a two page explanation of the Skirmish Campaigns format, a table detailing how to translate the scenarios to various sets of rules, a strategic map, three pages explaining the campaigns, six pages of background history and a selected bibliography before moving into the actual scenarios.

The scenarios are all around platoon size and the only armour required is a lone PzKpfw I in the base forces but addition ones, SdKfz 222 or PzKpfw IIs in the variable attachments; however, many of the scenarios require Norwegian troops, which will be difficult to source in some scales.  In addition, they call for a mix of troops on both sides with the Germans requiring standard infantry, mountain troops and fallschirmjaeger; whilst the Allies require standard British infantry, Scots Guards, French Foreign Legion and Chasseurs Alpins in addition to the Norwegians (with some ski troops needed in the variable attachments). 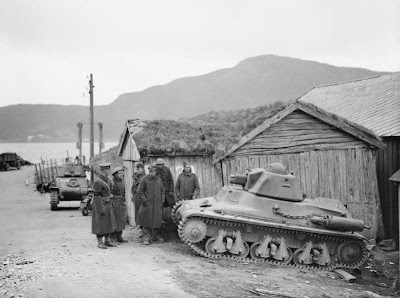 The terrain is largely woods and hills but some scenarios require a few buildings and one needs part of the twon of Bjerkvik.

I have yet to play any of the scenarios from the book, largely as I don't have the suitable figures and, indeed am finding it difficult to source appropriate ones in 28mm.  Of all the Skirmish Campaigns booklets I have I suspect this is the one I am likely to actually play the fewest scenarios from.
Posted by Whisperin Al at 10:30 am