Wargames Week: Up the Arsenal

Next up was a first outing for my Indian Mutiny figures from Mutineer Miniatures.  For easy I decided to use the supplement and scenario for Sharp Practice from the Too Fat Lardies 2008 Christmas Special.  The scenario adopts the usual Lardies Carry On style humour (as you can probably tell from the title) with Lenin playing the part of the ubiquitous Flashman and me as the Mutineer leader Ram Dittin.  Flashman's mission was simply to raid the old arsenal and bring back much needed ammunition and supplies all under the noses of the Mutineers!

Flashman decided to split their forces with Lieutenants Jarce and St James leading the assault on the arsenal whilst he protected their rear.  The attack didn't start too well with the allegedly stealthy Sepoy sent to take care of the gate house guard altered him instead.  The British decided to try rushing the gate before the Mutineers reacted.  This went rather better with the British quickly taking the yard and stables. 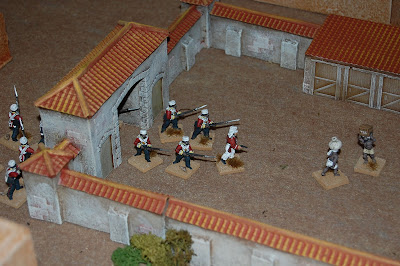 Unfortunately for Flashy the rear of the arsenal wasn't quite as safe as he was hoping as some Badmashes from the bazaar heard the firing and began rushing to reinforce the arsenal. 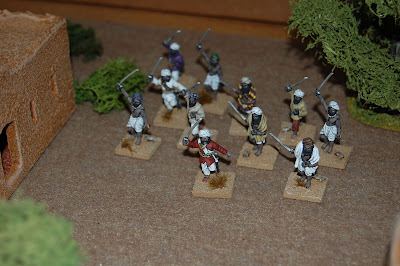 Flashman formed his men into a firing line and let loose a volley into the advancing Mutineers which gave them a little pause; however, another unit appeared on their right flank. 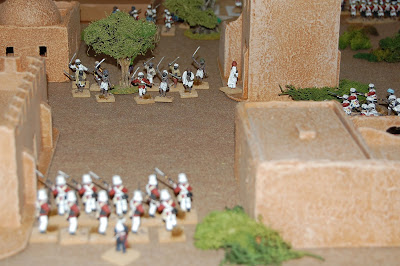 Meanwhile the arsenal garrison had eventually organised themselves and counter attacked.  After some fierce and bloody fighting the tables were turned on the British and Lieutenant St James was forced to make a last stand against the arsenal wall where they paid the ultimate price.

Arriving too late to save St James, Lieutenant Jarce led his furious men in a vicious assault which put paid to the Mutineer garrison.  With the arsenal secured, Jarce organised his men to load mules from the stables with supplies.

Behind the arsenal Flashman ordered a few more volleys and then had his men fall back in good order.  Some Mutineers who slipped past Flashman managed to run to the front of the arsenal where they came under murderous fire from the remaining unit of the Madras Fusiliers and made a hasty retreat.

With the flanks covered the British made a organised withdrawal with the necessary supplies.
Posted by Whisperin Al at 10:38 am