I never thought it would happen but the Too Fat Lardies have actually produced a full colour professionally bound rule book!  It's the new (3rd) edition of their I Ain't Been Shot Mum company size WW2 rules in fact.  So I felt compelled to buy it.

The rules are now beautifully presented in over 100 pages interspersed with diagrams, examples and some nice photos.  But what else has changed?

If you weren't familiar with the previous edition of the rules, you can find my overview here.

The core rules are pretty much unchanged but with lots of improvement in layout, explanation and the introduction of some concepts from some of the other Lardies rules (e.g. Command Initiative).  Some of the terminology has been improved - particularly "wounds" (which was confusing) which have become shock.  The main change for infantry has been with the Big Men who are no longer rated by dice but rather with a Command Initiative rating.  This is supplemented by Command Initiative cards within the deck which may only be used by Big Men of that rating or above.  The rating and the cards provide a number of actions that the Big Man may perform, activating a unit for example.  The rating also determines the Big Man's command radius.

The armour rules have been overhauled too which was a rather weak area for the previous edition and the concept of "Aces" has been introduced to allow for those really exceptional individuals who crop up in various accounts.

There are six generic and four historical scenarios included along with a "handbook" section covering the organisation of forces for Normandy.  This shows the model the Lardies will be using as they update their theatre specific supplements for the new edition.  Fortunately the changes aren't substantial so the old supplements can still be used with some easy tweaks (as outlined in the Lard Island News blog).

In addition to the new rules the Lardies have also produced an official printed set of cards to use with them.  There are 104 cards, which are larger than normal playing cards, which allow you to field two companies of infantry, five platoons of armour and eight Big Men per side along with three off-table support units and all the bonus characteristic cards you will need. 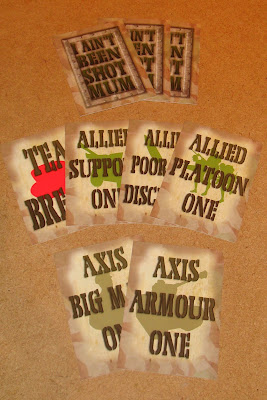 There is also an official set of tokens to accompany the rules which include low ammo, artillery aiming point,  pinned/suppressed, reduced actions, AFV reduced movement, AFV immobilised, AFV main gun damaged and AFV main gun disabled markers as you can see below: 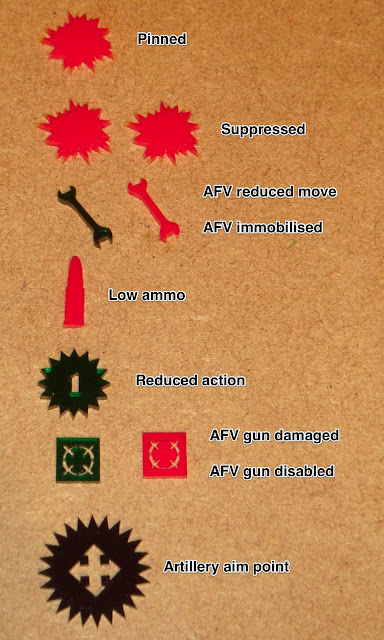 The rules are available in softback, pdf or tablet enabled pdf and also in bundles with the cards and tokens.

I am glad I bought them as I have now got my 15mm WW2 figures out of the boxes and am starting to plan a game with them!
Posted by Whisperin Al at 4:55 pm