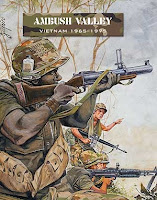 Ambush Valley is the third source book for the Force on Force rules and covers the Vietnam War.   The book is over 180 pages packed with useful information on a wide variety of units which were involved in the conflict.

There are around 20 pages of the book taken up with new or modified rules for Force on Force (including special rules for civilians and for boats) but the remainder of the book is full of data which aren't FoF specific.

This is a great resource for anyone interested in information on the forces involved in Vietnam and given the volume of data is great value.  It is much lighter on scenarios though, with only six being included, and so is more useful as a reference work rather than for game ideas.

Email ThisBlogThis!Share to TwitterShare to FacebookShare to Pinterest
Labels: Force on Force, vietnam