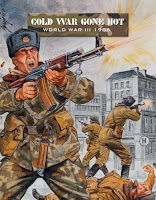 Hot on the heels of Ambush Valley comes the fourth source book for Force on Force but the first covering an conflict that never actually happened.

Unlike Ambush Valley, Cold War Gone Hot is focussed more on scenarios.  In its case there are 22 of them.  They are split into three groupings, Col War Fears, Cold War Realities and Cold War Fantasies to suit the approach you wish to take to this alternative history.

Cold War Fears is based on the views held at the time (irrespective of whether these were based on fact rather than speculation).  So you get a Soviet and Warsaw Pact with significantly superior numbers of forces and worryingly similar capabilities to the West.

Cold War Realities is based in the real world following the release of hard facts after the fall of the Berlin Wall and the break up of the Soviet bloc.  The scenarios in this section also focus on a somewhat more aggressive NATO in order to spice things up.

Cold War Fantasies is based more in the world of Holywood than the real one, taking its inspiration from films and fiction set in the period.

The balance of the 120 odd page book contains special rules, unit and vehicle information etc.  It is a useful reference work if you are interested in a counter factual conflict in the 1980s that's for sure.

Email ThisBlogThis!Share to TwitterShare to FacebookShare to Pinterest
Labels: Force on Force, modern